First of all, did anyone watch Betty White on SNL? Oh my. Love her.

I met up with some girlfriends down in Dallas for the Warrior Dash. It’s a 3 mile run with obstacles.

We walked into the courtyard, not knowing what to expect. Me, a pirate. Juice, wonderwoman.

Juice found some of her superhero friends while waiting for our heat to run.

The fire blasted and we were off!! I’ve taken some photos off of the website, so we’re not in all of them. But we did *do* all of these, including swimming across a pond and swallowing muddy water in which I’m sure some people peed. 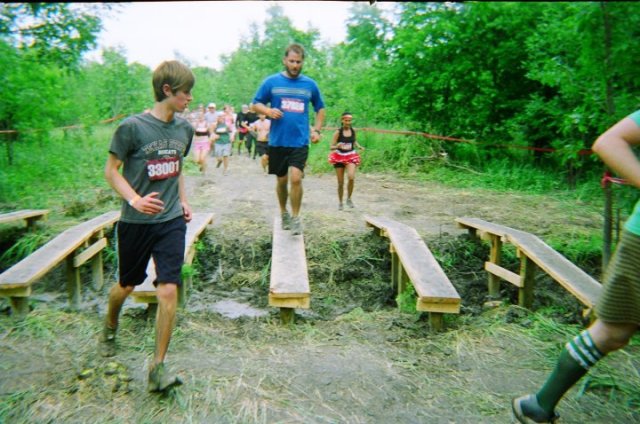 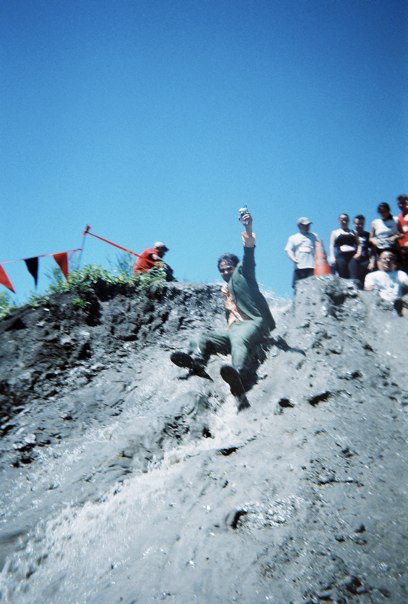 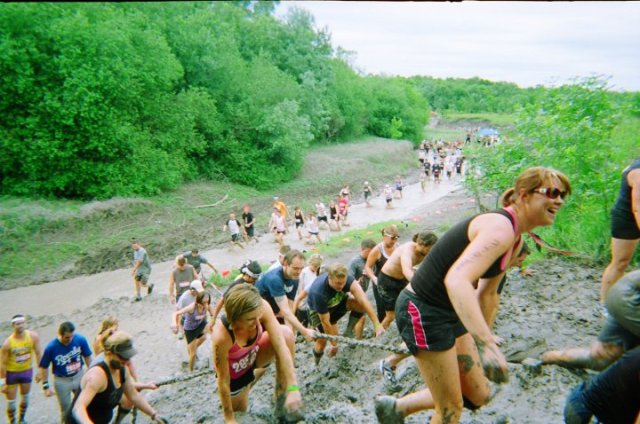 And apparently this is how I do it. Like a baby fawn just learning how to walk. Could you imagine me as a firefighter.

the last leg was in the mud pit, crawling under barbed wire. You got booed if you didn’t get dirty.

I was too busy making sure my pirate sash covered my mid-section. Forget  trying not to collapse in the mud, did anyone have a girdle?? 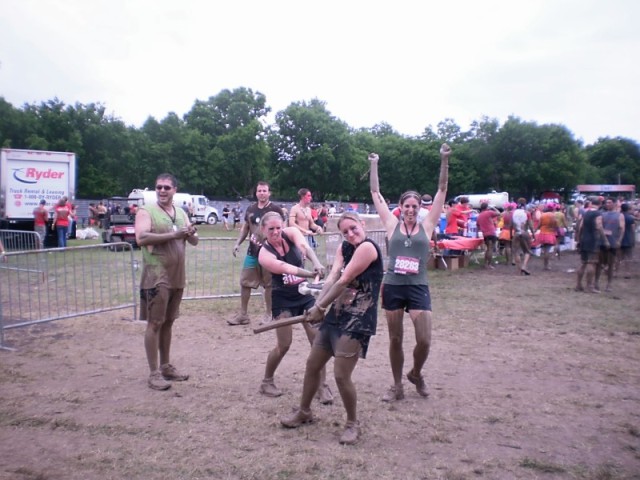 Here are the other girls we met up with down there. They all carried foam viking weapons through the race. 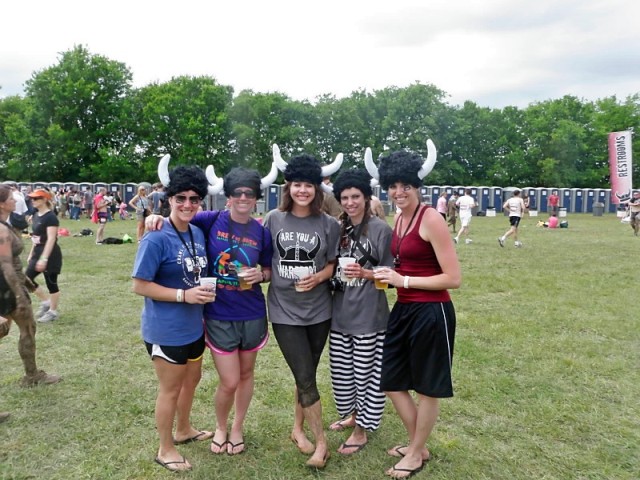 Afterwards, we hung out in the courtyard area, peeling off mud, and soothing our achy bones with cold ones. A band was playing in the back and we enjoyed people watching.

Something I’d do again and I think R would really like it.

After this, I’ve decided I just might skip on the mud bath option at a spa.

Why is there a muddy pirate posing next to a dirty Wonder Woman?

Like Loading...
Another interesting outing we had in Dallas was attending a black and white play, done in a 40s type style. The director (and main character) has made this his signature style. 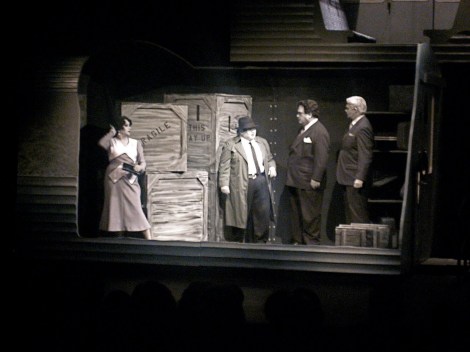 Can you believe this? I was extremely impressed.
Thank you R for getting me interested in plays. Yes, you heard that right.. R did.
I used to require a song & dance to keep my attention, but R’s not too crazy about those broadway shows (although he will sit politely through one). He does like plays, however, so I’ve been mixing them in to appease his taste. And now I’m really enjoying them too.

At intermission, you could fill out who you think committed the murder, throw it into box, and hope to win a prize.

The director played a bumbly, rambling detective who shows up in all of his plays.

At the end, his wife brought out the forms to pick a winner… and the burst of red was such a nice surprise against the backdrop and other characters.

But the weird part was seeing them after the show. You’d think that after the lighting was taken away, the characters would look completely superficial.

It was like walking out to a row of dead people. And so I of course had to get a photo with them.

This is the tannest I’ll ever look. Let’s all savor it.

S and I have a lot to talk about during our next ESL tutoring session, oh yes we do. We meet twice a week to review english grammar, conversational skills, etc. She was born in Korea, and has lived here for about 4 years, but just wanted freshening up. Her English is fabulous and I’m really hoping she doesn’t notice how little help she needs, because I’d like to befriend her.

During some sessions we just talk (while I become the English Nazi and point out improvements). I normally ask her what she did over the weekend and one time she mentioned a trip to dallas which included a spa. It is a korean style spa and would be a good experience for you, she said.

Well, who would pass up a spa opportunity? Not I.

So last minute, R & I decided we might as well go check it out. I’d never been to Dallas, and it’s not a bad drive. 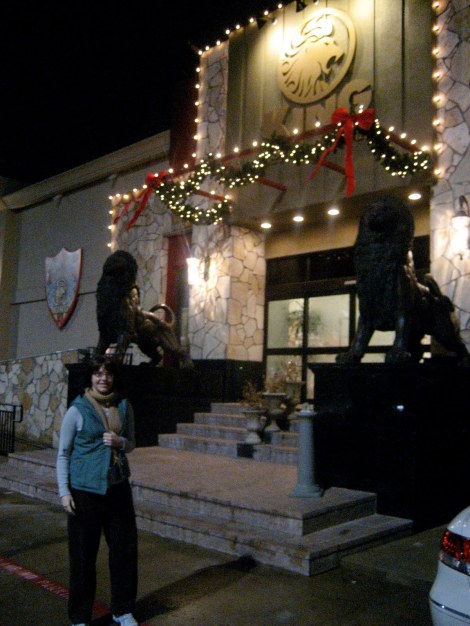 Oh, poor unsuspecting Carolyn. She really should’ve asked S more questions. Instead, she be-bopped her way up the stairs, paid the $18 for a 24 hour period, parted ways with her husband into the women’s spa area, and stopped dead in her tracks.
I literally thought I had just joined the broadway show Hair.
Except I was only the make-up artist.
And who do you think would be more embarrassed? The entire cast walking around naked, or the lonely make-up artist fully clothed?
So I quickly turned around and side-shuffled my way to the assigned locker, all the while boring my eyes into the wood floor. Wow, was this real or laminate? If this is laminate, could’ve fooled me maybe we’ll have this type put in if we move out of the dorm room I wonder who to ask should I just walk out and ask the manager?… an internal conversation that went on for a good five minutes before I faced my fears.
Because you see, you are given no towels. And in order to obtain one you have to walk what feels like a city block and enter the spa, ahem, naked. And on each side of this gauntlet, there are girls chit-chatting, laughing hysterically, and I swore I saw someone crocheting.
What made matters worse, I started thinking of my friend K’s experience in Moracco. While studying in Spain, some girls in the school scheduled a trip there for a weekend. I signed up, then backed out last minute due to insufficient funds. At least that’s what the ATM told me. But really I think it was God sparing me from what K ended up having to endure. They went to a typical bathhouse, where clothes were left at the door and everyone was brought in for a “scrubbing session.” Are you picturing people going off to their own little rooms for this? Oh no, you stood in the middle of a semi-circle of girls and got scrubbed down in front of them. Talk about being left raw. Physically and emotionally.
So here I was in this spa… hands strategically placed and made a run for it, praying I wouldn’t slip (God, could you imagine that? Wait, don’t.) and took the appropriate shower before getting into the spas After reading a sign that said “If you are disturbed that a patron has not taken a shower with soap and has entered the spa, please tell an attendant…”, I made sure every other flippin person there saw me with soap in hand. No way was I going to hold a nude conversation with an attendant regarding the cleanliness of my bits and pieces..  because you know my luck. Oh, the horror of just thinking about it.
After I loosened up a bit and realized that absolutely no one gave two rats whether I was there or not, I started to feel (drum roll) relaxed!
You’re given a guide on how to use the pools: stay ten minutes in the hottest pool, then dip into the cold one. Sit in the steam room for ten mintues, then back to the cold pool, etc etc, and by golly it worked.
After you’ve had enough spa time, you are given a “uniform”: pink for girls, gray for boys to meet in the communal area with the men.
Men. Men? Oh my goodness… R!!!!! I had forgotten about him.

He had no expression on his face when I walked out to the lobby. I asked how it went while patting his hand.  He said he was thankful the locker key came with a wristband, for multiple reasons.
He did look relaxed though.
So for the next 90 minutes, we wandered in and out of various saunas. Some were more popular than others. At one point, we both almost fell asleep in one.
I can’t tell you how our bodies just caved in on itself. Wonderful. 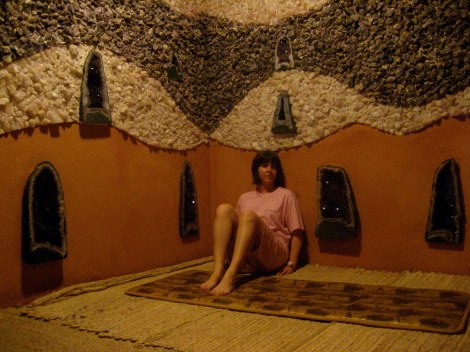 We were absolute zombies. Just shuffling to and fro… from the spa to the saunas to what I like to call the Hall of Chairs. Limp noodles, we were. 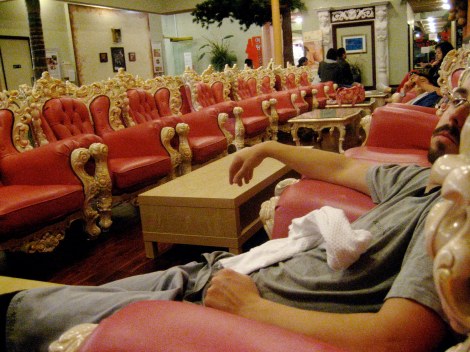 And then.. then we found them. A magical place, full of lazy boy chairs situated in front of a movie screen. This was where we would end the night. Kiwi and Carrot drinks that look like our normal NYE spirited beverages, but had none of the regrets.
It. was. delightful.
Would you believe it if I said we’re game to go back again? Because we would… broadway productions and all. 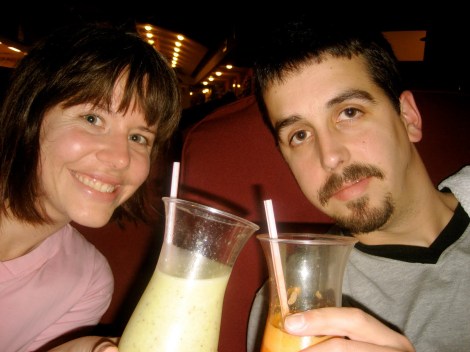