What do you get when you combine hair, sugar, and Moscoto wine? Duh, spa night. Particularly with girlfriends you haven’t seen in what feels like forever.

Nevermind, Sandlot reference. There are some words that I can’t say without thinking of a movie/show. Like I’ve mentioned before, ‘fickle’ (I Love Lucy with Bill Harden – I’m fickle?); ‘Occurs’ (The Last of the Mohicans – No matter what occurs, I WILL find you.); and Supercalifragilisticexpialidocious (Mary Poppins – …even though the sound of it is something quite atrocious). That last one comes up quite a bit, believe it or not.

Anyway, so L & A came down for the weekend. Upon arrival, R uncorked a couple bottles of wine and then immediately went to bed….leaving us in the living room to talk until, wait for it, 5 o’clock in the morning. Look out kids – Mama’s gettin’ caraaaazy up in he-uh!

I can’t remember the last time I stayed up that late. Oh, wait, yes I can.. the first week with Ruthie. This time around was infinitely better, though. The hours flew by, discussing jobs, babies, memories…

The next day we ate breakfast, chit-chatted for a few more hours and then drove to Fayetteville to pick up our 5K race packets that we never ended up going to. We had priorities: sleep.

A teeny spa area had been set up. I looked at R and smiled.

He follows directions well! [For anyone who cares about how sexy R and my conversations are, we spent a good portion of this morning discussing when to use ‘good’ and ‘well’. We decided that the state of being is good, and doing a task is well. Please correct me if there are any exceptions, my fellow grammar freaks.]

because I left him details on how to set it up. Yes, I am that cool. I even erased one rectangle because it was not proportionate to the coffee table. How R snagged such a catch as me, we’ll never know.

The excitement of seeing the table was short-lived, because we were exhausted. So we took a nap. I came out only when I heard hooting owls in the living room. A had found some background spa music. I mean, when aren’t owls relaxing?

So I ran out there and yelled, bootcamp style, at them to get in relaxed positions. NOW!

Nothing like stressing someone out beforehand. But L happily obliged with the foot soak. 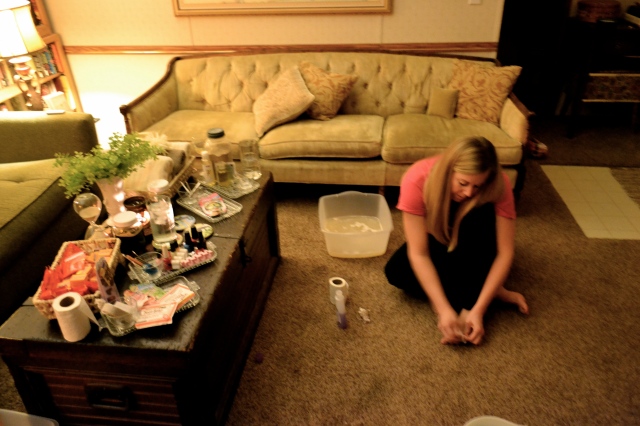 And A, who I’m sure is ecstatic about this photo, started in on her toenails.

…and then it got serious, folks. I’d been wanting to try a sugar wax recipe I saw on youtube. This was a big deal to me. Because even though I have a high pain tolerance (for the most part), waxing is my achilles’ heel. The last time I had my legs done, I was living in Spain and spent the majority of the time trying to yell in spanish that waxing is akin to corsets and will be written about in future history books on how women torture themselves for beauty.

I gave up after trying to think of the word  for ‘waxing’ and just started whimpering. Big baby.

This would be my redemption. 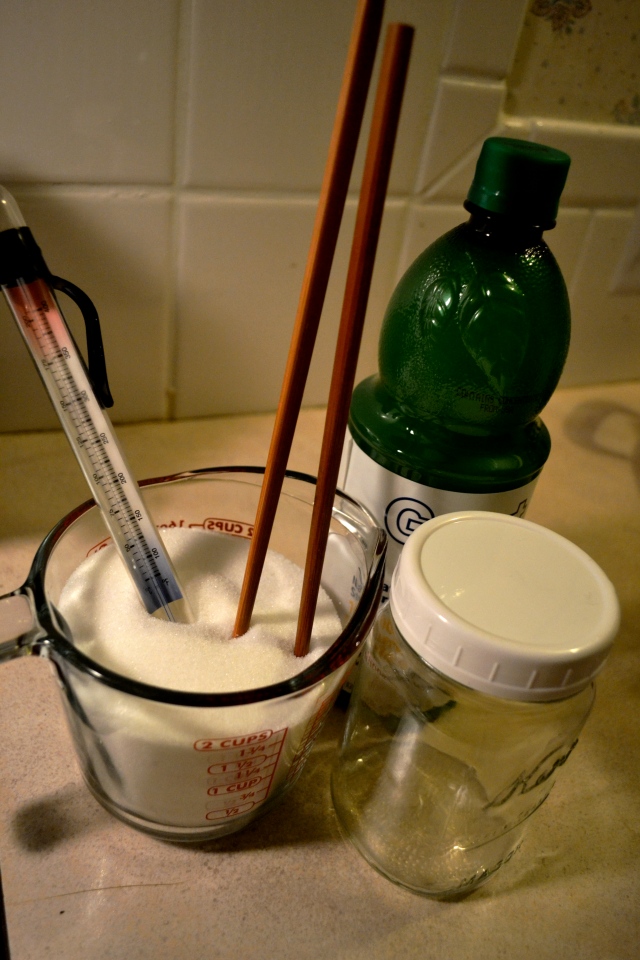 Before the girls came down, I made a couple batches of wax. R was impressed and said that was unlike me. I said Thank You without realizing it really wasn’t much of a compliment.

Here’s the recipe. Get ready, because it’s extremely difficult:

Have I lost you yet?

Mix it all together and then throw into a pot until boiling.

Oh yeah, if possible, have a candy thermometer handy. Would you know that I had just picked that bad boy up at an estate sale a couple weeks prior? And R says I only bring home junk. Hmph.

After you get it to a boil, reduce the heat to the low.

I don’t know what ‘low’ looks like on a gas stove, but this is what my flame looked like.

Here’s where the trickiest part begins. You want the mixture to be slightly thicker than honey and a dark amber color. But watch out! It will literally turn to candy if you let it cook for too long.

Here it is light. 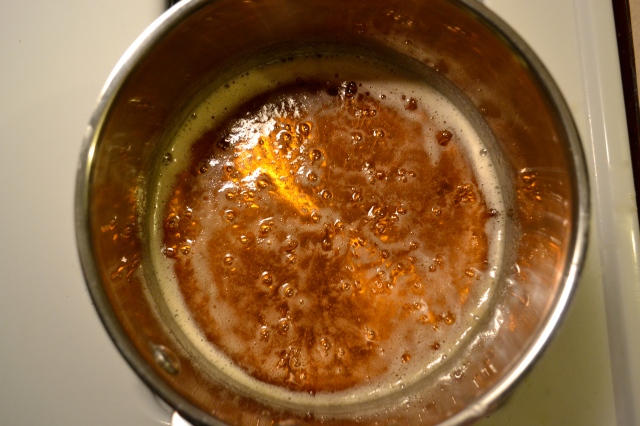 The first batch I made was left on until close to 260. The second was taken off around 240 and they both work fine.

In fact, it worked great. So well in fact, that I made loud exclamations on each pull of the cloth.

Okay, I’ll admit. I did two strips on my leg and then was dunzo. Both A & L were champs and did several areas.

I was intending on waxing the rest of my legs at my parents’ house and each night would find a new excuse… usually a word that started with HG and ended with TV bailed me out. When we got home yesterday, I took a look at my now extremely scary-looking legs and by golly, those two strips were still bare after a full week! That, coupled with R’s observation of how whiney I was: “Did A & L even do the waxing because they didn’t make any noise,” I am now finished with both lower legs.

I don’t know why everyone made such a big deal out of it.

Our investigative team has confirmed that Carolyn was spotted openly displaying her baby bump. For the past several weeks we’d heard rumors that she’s been wearing tighter fitting tops, sometimes tied in the back to accentuate said bump.

Yesterday was our first day to catch a glimpse. We had reporters staked out at what she calls The Shack, hiding between cows in the neighboring yard.

Carolyn walked blissfully unaware to The Shack holding letters of some sort. Could these have been from the mailbox? We’ll have our team stay an extra day to confirm that.

Before entering the structure with a roof, she stopped to check out what we think was a killdeer’s nest. It’s believed that she really liked that darn bird and misses its “broken” wing.

[updated on Thursday 5/19 @ 4:11 pm] Sources have confirmed that the dress worn in yesterday’s sighting was not, I repeat NOT, the dress bought from Target. We’ve been informed that at Target’s dressing room, after trying on a dress, a five-year-old looked at her and said, “That old lady has the same dress as mom!” Carolyn seems to be recovering fine from the shocking news.

We sent our investigative team out to Carolyn’s work today to try and catch more sightings. One managed to hide in the teacher’s lounge. 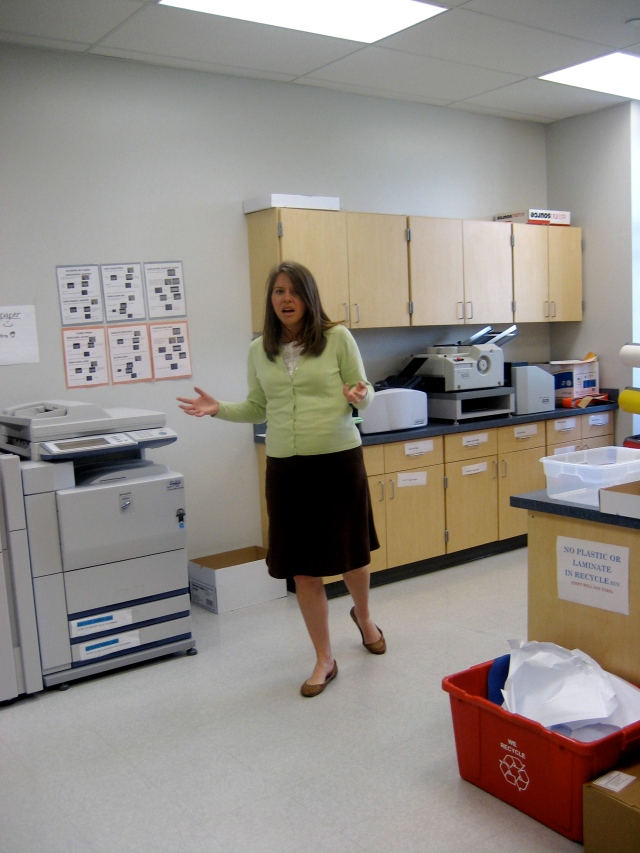 But was instantly discovered.

Carolyn ran away trying to hide that humongous thing that we shall no longer call a bump. Rather the baby mountain. She seemed to really enjoy the nachos at lunch though.

Before I write about the throwdown between two restaurants undertaken by a friend and I, otherwise known as the Battle of the Bulge (her bulge from pregnancy and my bulge from that third helping), I thought I’d first talk about some make-up I made. 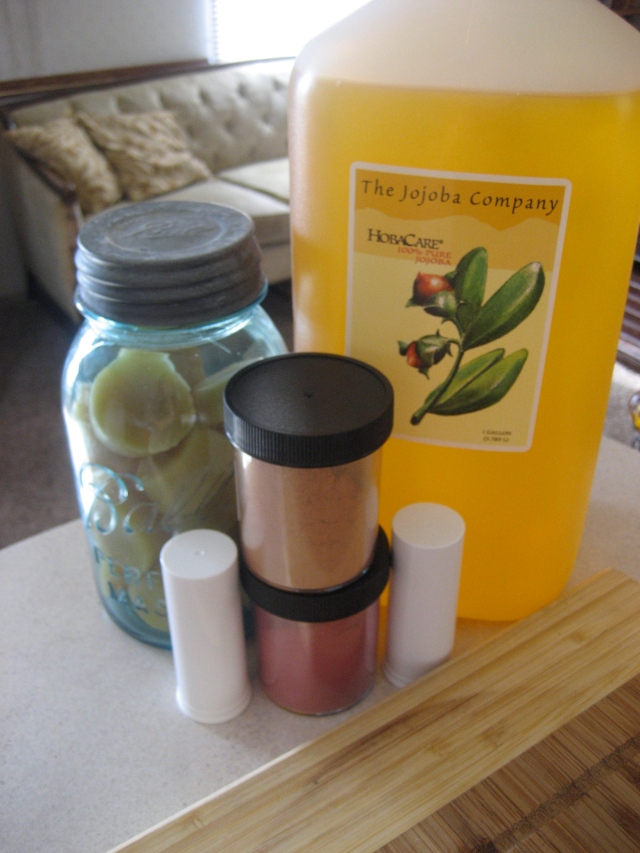 The recipe called for:

When looking for the color of mica to use, I was a bit overwhelmed. I’d like to eventually make a simple foundation to wear daily as opposed to the schlack I currently use. What’s in that store bought stuff anyway? And why do I love it so? I don’t know, but I do. So I ended up choosing a nude shade.

This recipe can also be used for chapstick and so I picked out a berry-colored mica.

First, you melt the beeswax.

I was home alone that day, and so pulled out a Native-American sushi dish to keep me company. There’s a grocery store in town that sells the most random things. They were also selling canisters with old photos of cowboys cooking alongside a chuck wagon. And yes, I bought all of them.

Don’t know what it is about them, but I have a tendency to buy old photos in whatever capacity they’re presented to me. They’re just… timeless. To think that this guy was breathing when it was originally taken. I like having those moments of life surrounding me, even though they’re long gone.

But if I’m honest with ya, I really only bought these because I have a thing for those chiefs. Prairie fever, if you will.

Watch the beeswax melt until they look like a pair of eyes. This bee apparently had a lazy eye from the looks of the melting.

Who, in their right mind, would want a photo of themselves on a serving dish 100 years from now. I feel sorry for this guy. Do I need to stipulate that in a will or something? “In case of mass-marketing of my face, please use image attached.”

Because you know this is the photo they’d choose otherwise.

Can you imagine serving chicken piccata on that scary face? It’d at least help people stick to their diet, that’s for sure.

Okay, back to the make-up. Pour in the jojoba oil.

It will cause the beeswax to seize up a bit, so just continue stirring until it’s all nicely melted again.

And, lastly, dump in the mica. I’d recommend keeping it on the heat until pouring into the tubes, because the beeswax does solidify quickly.

This recipe made about 12 normal-sized tubes of chapstick (which I also use as blush, since it’s tinted). The bigger tubes in the first photo were used for the brownish mica and are what I’m currently calling “bronzer”.

I’m not yet ready to use it only as a foundation. My umbilical cord to thick, plastered war paint has not been severed. One day, though, I will break free. To know that only three ingredients are on my face at any given time sounds really lovely. Doesn’t it?

We’re off to picnic amongst hoop dresses and war uniforms today. Hope the weather holds out.

Since I had started making my own soap, I’d also been thinking of expanding the home-ec project into other areas of skin care. Namely: make-up, face wash, and moisturizer. My 8th grade science teacher kept coming back to me, “Skin is your largest organ. Skin is your largest organ, Carolyn. CAROLYN!” ..at which point I would wipe away drool and immediately ask my neighbor for some CornNuts.

I’m hungry when waking up from a nap.

Luckily R agreed that this was important, as there was going to be an initial cost. More than I thought, in fact. But after crunching some numbers, the total amount of product easily exceeds what we would get pre-packaged at the store for the same amount, and with higher quality ingredients.

First up is the almond meal facial scrub recipe I found:

There’s something so intoxicating about putting honey on my skin. It’s like I’m channeling Cleopatra, who used honey on her entire body.

Hell, I’d even settle for Elizabeth Taylor’s skin at this point. After she married Richard Burton. 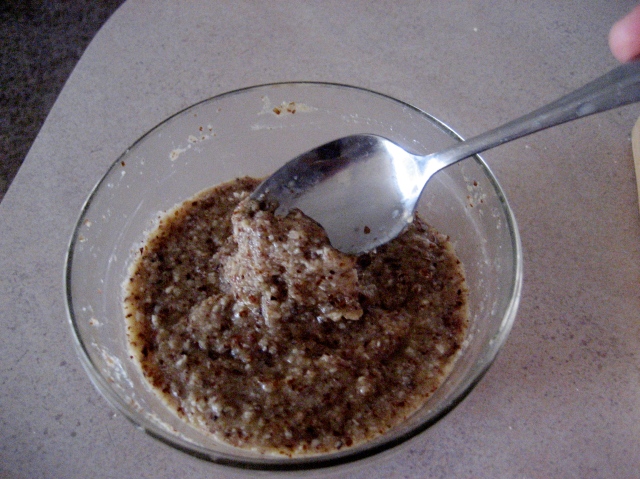 I tripled this recipe so as not to have to make it every other day and will admit that it’s not the easiest to apply. Honestly, it’s downright messy.

But it did take the 7 layers of foundation off without a hitch and my skin doesn’t even feel dry. In fact, it’s not oily either.

So far so good. We’ll see about the homemade foundation, though. I’m predicting that I’ll soon be asked to star in the sequel to Killer Clowns from Outer Space.