In the form of my first official knitted fabric swatch.
Jesus was born too, but I’m sure He would’ve appreciated blue yarn more?

I’ve spent the past two saturday mornings at a little shop in the fayetteville square. Both days have been cold and overcast. Perfect days for this activity.

Once in the store, I would run to the back and grab a seat at the old wooden table. This time the group was already there. A group that included a chatty woman, a defensive woman, a bubbly woman, and a weird quiet woman that reminded them of the girl on the Breakfast Club. You know, the one that would shake her hair onto black paper to make snowy craft projects?
That’s me. But I’m starting to prefer to be the quiet one. They’re the scariest in the group, I think, because … they’re listening. Someone who would actually listen to anything I say instantly ups the fright ante.

This is the chair I try to grab each class. I’ll knock someone over if I have to. I’ve been debating about offering money for it. I’d like it for my future dining room table.

I’d take the cat too. She wanders around the table playing with our needles and rolling yarn balls back and forth.
Can this class get any more picture-perfect?

Like Loading...
We’ve been holed up here today, trying to get over whatever bug is making us feel lowsy. I did go to my knitting class, but quickly came home and have hardly moved from the sofa.
Last night, neither of us wanted to make dinner. That is, until we watched Survivor. (yes, still watch this darn show. I think I’m addicted.)
And then we saw it during the reward challenge: burger… french fries… beer…
Oh my, we looked at each other and exlaimed, “We need that. Now.”

So, as if we had not eaten in 30 days, we piled up the plates with our own reward challenge.
The only challenge here was to not use too much mayo. Does anyone else do that?
And can I say that I will never go back to frozen french fries? First of all, so much cheaper with plain ‘ol taters. Secondly, so much tastier. Unfortunately, I did not make the buns. I’ve made buns before and they took me forever, but came out okay. I need to try again, but this was an emergency. We needed them stat to gorge our faces.
Our sicky heads were happy last night. So very, very happy. 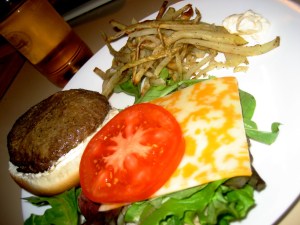 Like Loading...
Sunday would have been the perfect day to sit by an open window and knit during the afternoon hours. It was rainy, yet not too cool. I had good view of our backyard pasture, and the neighbors must have been all on vacation. Silence is so rare. I cherished it.
I’ve got several goals swirling around in my head for the year to come. But one of them I’m getting started sooner than the rest.
Since I cannot seem to get past the casting stage of knitting, I’ve decided to take a class. Sorry in advance for everyone’s birthday next year. I’ll give you three guesses as to what you’ll be receiving.

Like Loading...
Yes, cross-eyed and frustrated. A deadly combination. Now that I am without TV and R and I have run out of things to talk about, I’ve tried to find other interests (i.e. baking)..and now knitting. I bought this book a couple weeks ago purely based on the title. I figured if I could have a 50% lead going into knitting/stitching, I’d have a better shot at it.
If any of you knew me during my “women’s studies” phase in college (a hard core mentality that only lasted, oh…about 2-3 years, yet some remnants still linger), you’re probably laughing at the idea of me quietly knitting on the couch at night. I giggled too, until I read the introduction to this book and it quickly shut me up…. So if you’ll allow me to stir things up on Cue the Banjo, please read below… 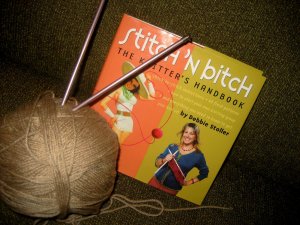 “[When describing her experience of letting her friends know she had taken up knitting] Soon it occurred to me that if I had told these folks I’d been playing soccer, or learning karate, or taken up carpentry, they most likely would have said, “Cool,” because a girl doing a traditionally male activity — now, that’s feminist, right? But a girl doing a traditionally female acitvity — let alone one as frivolous and time-wasting as knitting — well, what were they to make of that?

It made me think of my original feminist position. … Why was [knitting] so looked down on? It seemed to me that the main difference between knitting and, say, fishing or woodworking or basketball, was that knitting had traditionally been done by women. As far as I could tell, that was the only reason it had gotten such a bad rap. And that’s when it dawned on me: All those people who looked down on knitting — and housework, and housewives — were not being feminist at all. In fact, they were being anti-feminist, since they seemed to think that only those things that men did, or had done, were worthwhile.”
Having this little boost of sassiness integrated into the hobby helped me maintain my patience… when, after an hour of practicing, I could only successfully do cast-ons. This is the step prior to actually knitting. Every time I started to knit, all of those nice cast-ons would slide right off the needle, leaving everything unravelled. I told my friend on the phone today (K — also a knitter), that I would be quite happy with a small dishcloth. Now I’m hoping for a one-inch swatch of fabric… and a one-inch square seems daunting to me at this moment. 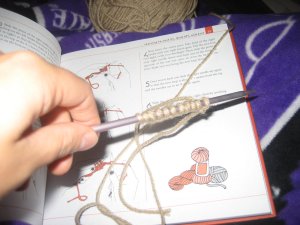 My cast-ons. The beginning of a beautiful, luxurious swatch.