Gertie is asleep. The girls organized the toy room and are now watching a movie and I’m doing what I love to do: planning. Will these ever come to be? Maybe, maybe not. But this is my favorite part of the process. And it feels different this time because I’m forcing myself to take it slowly. Everything in dotted lines are the far future, but we do have 1 garden bed, a new chicken coop, and compost bins.

Here’s our first and only garden bed for next year. I’m excited about it. My back goes out a lot, so we’ve decided to raise the bed to a standing/sitting-on-the-edge height as a preemptive strike. Beyond it, to the right, are the fruit trees with more to come. A Dogwood behind the garden is a sweet place for a bench. Mandy, my gardening/chicken-raising/bee-curious soul sister, walked me around the backyard and suggested a layout. I will forever love her for that.

Behind the bench and tree, in the sunny spot near the two chairs will house our new chickens. We’ve missed having those silly girls around. I kinda want to mix up the breeds, but also feel like I should stick to what I know. And we do love our Buff Orpingtons. 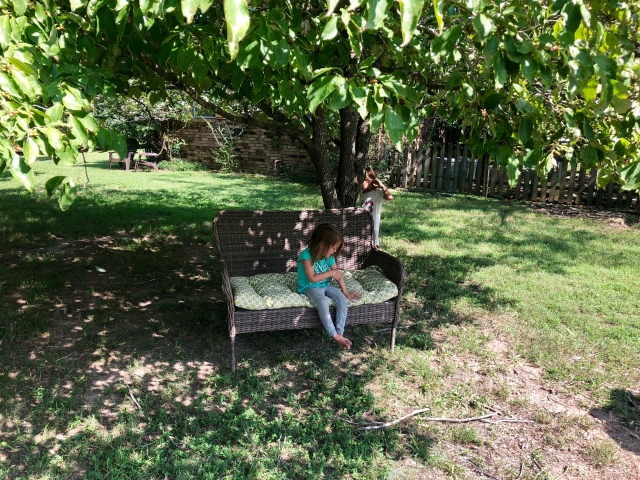 We never really used this side of the house very much, so it feels like a new property in a way. So happy.

Hope everyone had a good Labor Day. I spent the weekend with friends while wind blew in our faces. It was nice and my sunburnt nose agrees. As fun as it is to leave town, though, it’s such a breath of relief to finally arrive home after a 8 hour trip which normally takes 5.5 hours, but you decided to stop in every stinking town on the way home “to break it up” which actually just made it seem more unbearable than it really would have been to begin with.

R and I did get some good talkin’ in, though. And I needed that after he had been working late for most of the past few weeks.

Plus, we missed our livestock… which is what we’re calling our rabbits since, well, you know what we’re gonna have to do.

Next to them is the compost pile that we’ve been adding to over the past month. We positioned it close so that the transfer of, ahem, poop is quick and easy. They tend to “read the paper” in the same spot, so we put some buckets underneath to catch it all.

I get excited over rabbit poop. What have I become.

Along with free wood pallets from Lowes. The manager shot me down the first time, but I’ve learned from past experience that you just need to find the right person. So I asked again, and they hooked me up.

N sawed off part of the front pallet and we were in business. Poop business.

And also quickly-rotting-food-from-Walmart business too. Man, it has been a race to eat all of our bananas in time. So I’ve been making mucho banana bread, because it’s not working. The racing, that is.

But guess what, it all mostly goes into the compost! And since we don’t have a garbage disposal, this is a win-win. Not that I normally put banana peels down the drain, but you get my drift.

In a couple months, we’ll have to leave this compost alone and so I’ve begun my search to find some more pallets for a second bin. While this one rests and decomposes until spring, we can start adding to the second one.

Who knew The Shack could produce such goodness!

Like Loading...
Or in this case, one big thing gets me excited. (I heard that, Office watchers.)
One of my favorite antique stores in a small town just north of us is building something big. And to me, it makes me grin every time I see it.

It’s a covering for a farmers market. Why does that make me happy? Because as of right now, there’s a splattering of random vendors set up in parking lots, street corners, and other places that catch you off guard.. not at all coordinated time-wise either.
No saturday morning shopping. More like driving home from work and oh what is that over there shopping. Which, don’t get me wrong, is fun too.
You know, to stop spontaneously and pick up a few good tomatoes. A few good tomatoes. Tell me about the sauce. You can’t handle the sauce.
Nevermind.

The only good saturday morning one-stop marketplace is about 45 minutes away. Thumbs down.
But this. This! Only 5 minutes.
Joy.

Like Loading...
…. You’re the next contestant to get starry eyed by jazz hands and a “grrrrreat price!” For the record everyone, R and I are no longer allowed into Sams anymore. We just haven’t built up the appropriate resistant to “deal, deal, deals!!”.
As we were walking down the aisles, struggling to focus on the list we painstakingly wrote out the night before, we heard on the loudspeaker “Anyone who would like a free paring knife, please meet in front of the deli.” R and I looked at each other, and like any other freebie-grubbing American, …vrrrroooom – off we went. We stood sardine-like in a crowd of about 30 and watched the smoothest smooth-talker give a schpeal on the latest set of knives that “he is about to run out of, so hurry folks, get them while you can!!”
Sold.
You only need to use the urgency scare-tactic on me and I’m done. I looked back at R and begged him with my eyes to tell me how dumb this purchase was. He started off strong, although I could see he was starting to break a sweat with the resistance. I turned back to the speaker and that’s when he brought out the grand prize. A food chopper — free!. I felt a hand squeeze my shoulder and knew that R had broken down. We were gonners.
…but man, will we be able to slice a tomato now!!

We were almost to the check-out line, when I think the upside down patio garden was strategically planted (no pun intended) in front of me. Somehow I managed to convince R that because he had not stayed strong during the knife presentation, I deserve this piece of plastic that will probably not last a season. I topped it off with the ole “but what tomatoes are you going to cut up with your knives??” line. It will only take about 300 tomato harvests to make up the price, but we were on cloud nine in the parking lot. We’ll see in a month if we regret it. 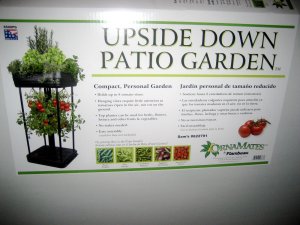