Oh Ryan. He’s finally 38. Unfortunately his birthday fell during three of the hard work/personal weeks he’s had in awhile. Not to mention being bone tired from dealing with all the estrogen in the house.

We originally were going to meet for lunch during Gertie’s therapy, but he just couldn’t get away, so I picked up some fast food and we sat in the car for a few minutes to eat it. I spent that time talking about a child abuse-turn-murder news story I’d just read, sobbing about all the poor little children that just want to be loved and that we need to adopt them all. Before he hopped out, he said, “Well this has been a lovely birthday meal.” 😆

I picked up the girls from school and as soon as we walked through the door, Ruthie started to help me decorate while Annie cleaned the toy room, Gertie finished her snack and I cleaned the kitchen. It really felt like I had teammates and They were so proud of the decor.

There was NO question what they wanted to get him. Candles.

Ruth made a list of the activities this evening: 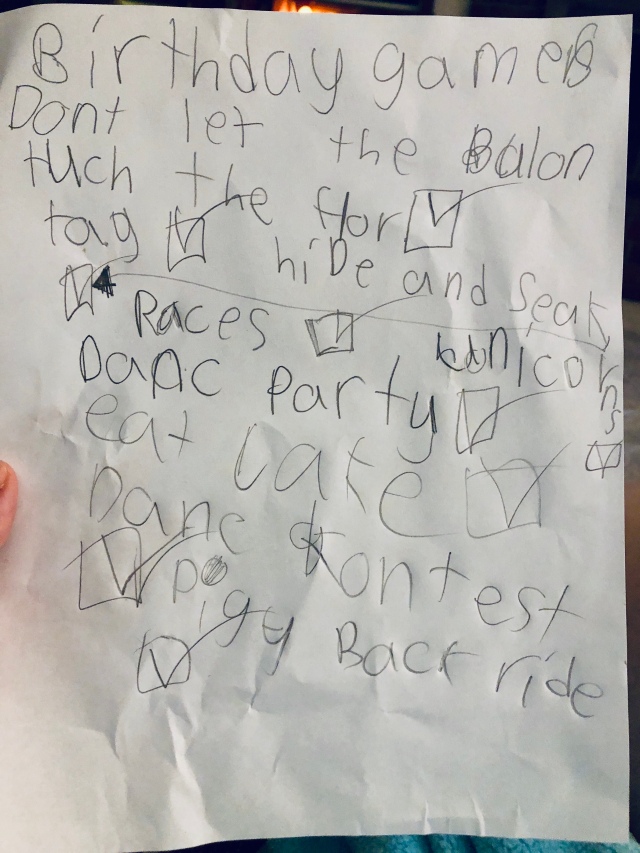 Ryan told her that this was the best birthday… she’s ever had.

We all do love our Ryan and take turns looking out the window hoping to see his car pull up every night. Thankful to see another year with him.

Their whole day revolves around when the neighbor boy walks home from the bus stop. It’s painful/so funny to watch… they circle him like sharks in the water, Ruthie loudly mentions awards she’s received or projects she has to do, and Annie outright giggling and saying “Oh Sean”. 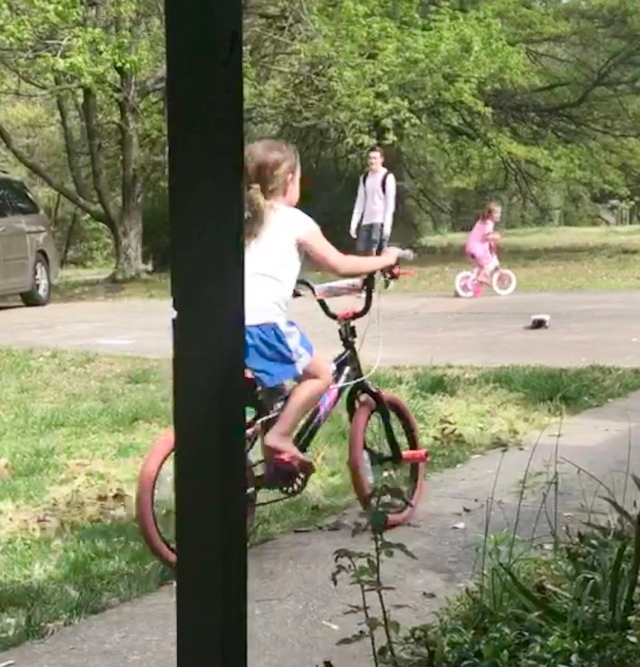 Early morning Easter craziness. Ruth woke up first and we caught her in the hallway. She said that the Easter bunny hadn’t come yet and climbed into bed with us. So that was fun, her thinking all the magic happened while all three of us laid there. 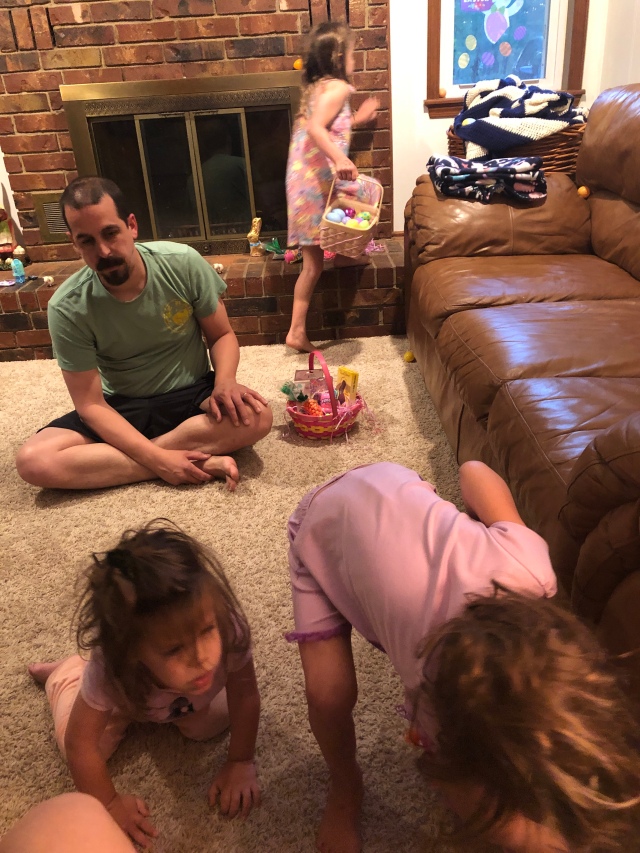 In the afternoon we went to our nearby little lake. Annie was surprisingly the only girl in her Easter dress wading in the creek.

A hodgepodge of pics. But first, this morning was like the wild west trying to get everyone ready and out the door. Gertie was particularly fussy. I don’t know if it’s a growth spurt coupled with unable to express herself, but it’s been like that consistently for the past few months. I feel like I’m in newborn territory again. Ryan woke up to it on Saturday and asked, “Does she always wake up like that?” Yes.

But today, I tried to fight the frustration and picked up my bible asking God to lead me to comfort. I don’t normally do this, so it was really out of the ordinary. Well the first page I opened to was exactly what I needed to see. A little box within the text.

Teaching Gertie to pump her legs. She really only needs to be told once or twice on things now. Including saying “help” if her walker gets stuck somewhere. She’ll stand there and quietly say help until someone rescues her.

Ryan and his Australian accent.

Perfect spring days for making roads and bridges and lakes and markets. Gertie walked from the front yard to the back over and over without me needing to follow her and I actually sat my butt in a chair and finished a book. It was a glorious day.

On another day, I hadn’t seen Ruthie and Annie for awhile and found them making a little house inside this bush, using clippers to form a window. It’s kind of hollow in the middle, allowing them to climb into it. I honestly could care less what they do as long as they stay outside on these sunny cool days. 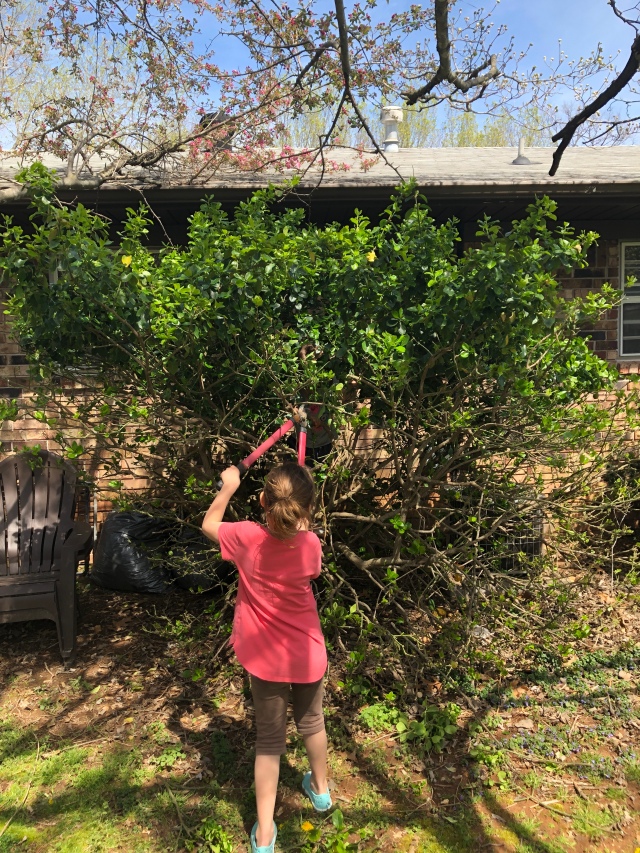 When Ryan and I hiked the Konza prairie in Manhattan, KS. A trail I’d walk incollege whenever I was struggling with my emotions. The wide expanse of it really helped me reposition my attitude. The world is actually a lot bigger than my little world, I’d remind myself. I’d like to walk it again when it’s green. 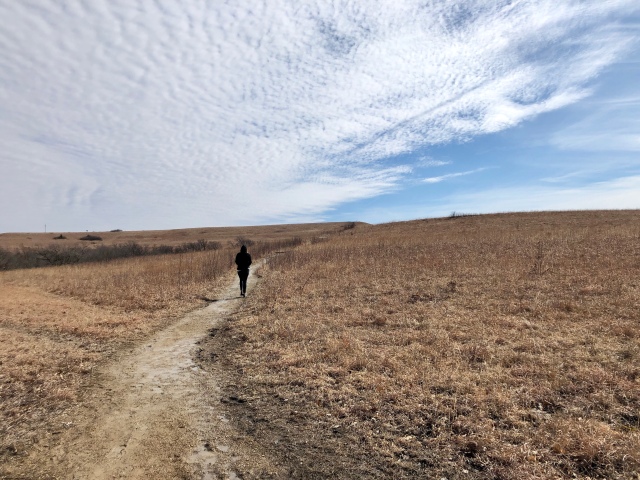 Ruthie did a “wax museum” with her class, dressing up as characters from Winn Dixie. They’d stand still and a parent could push the button on their hand. Then they’d say a little blurb they memorized about the character. She did such a good job for a shy little girl!

Haven’t had a play date in a long time. They spent the majority of the time forming a train down the slides. We went to go get donuts afterwards and I made a big deal about getting whatever donut they wanted and when I went up to pay, I couldn’t find my wallet. The cashier was so sweet, cancelled the transaction, and pushed the donuts towards me saying they were on the house. I was so grateful. Ryan swung by during his lunch later and paid for them.

A new found love: the mall. Gertie feels so cool walking around and gets a major workout. We always tell her she’s a mall walker like her Papa! Can’t wait to do this more when the heat sets in.

Sick Gertie. One of those nights where she laid on me the whole time. 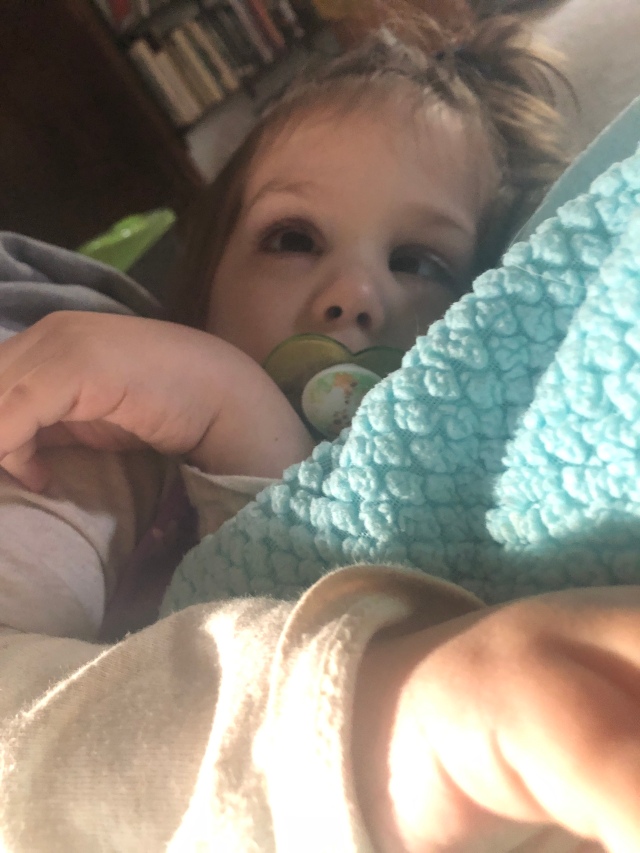 One of my favorite things: open windows where breezes billows out the curtains. 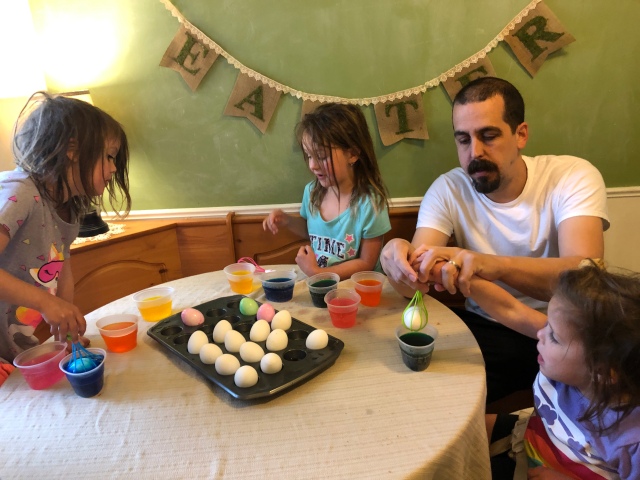 Ruthie at her science lab. 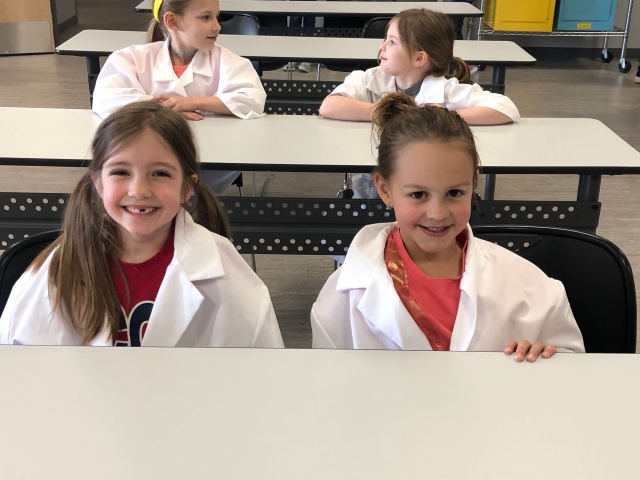 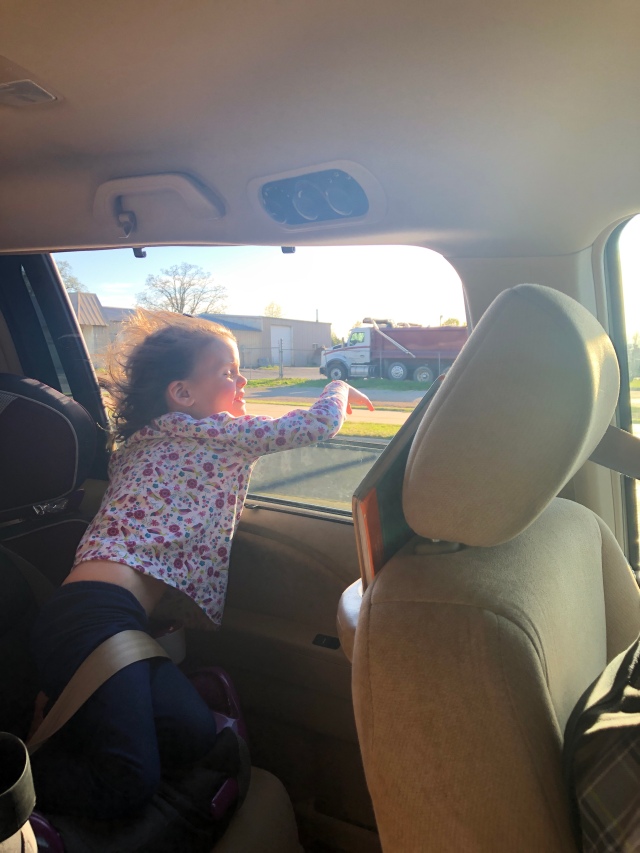 At her school’s fun run.

This girl Katie, the girl on the playdate standing to her right, Haddie, and Ruthie are tight friends at school. And I’m so thankful they’re sweet. We always try to squeeze in before she rolls her eyes, “What’s the most important thing, more than being pretty or cool?”