Ruthie wanted to throw her stuffed animal, Tabor, a birthday party, so she and I went to Walmart and bought some half price cupcakes and $1 plates and streamer. While they were setting up the table, Annie said how nice it was of Ruthie to get all this and Ruthie replied, “You should really thank Mommy. She spent her money on a birthday party for just a toy.” And I promise I didn’t guilt her during our Walmart trip, in fact I had to consciously refrain from making comments about that very thing. So it was nice to know that she at least had some awareness.

And yes, cupcakes at 7:45am. Give me some points, girls! They’re basically donuts, right?

I’ll never get tired of hearing him read to them. Gertie loves being read to too, and sometimes she’ll hang during the big-girl books, but normally he reads different ones to her. He wore himself out with all the various voices in The Miraculous Journey of Edward Toulane, though, so now I’m reading Judy Moody to them, with considerably less character fluctuation. I’d recently finished an audiobook and the woman reading didn’t change her voice that drastically, yet still conveyed different characters to me, so I’m feeling confident in my delivery. They don’t care. They say that too. Annie said directly that I didn’t have to lower my voice to be a boy.

We go to Sam’s every Sunday after church to eat because it’s so cheap and then we can get shopping done afterwards. Ruthie times it so she’s the first in line for the coveted steak sample and will get one for her dad if he’s not near. That’s a good partner. This past Sunday, Annie was standing up in the cart scream/singing “The Ants Go Marching One by One” through the aisles and Ruthie whispered to me, “When will she ever learn to be embarrassed?” Annie literally has no concept of people watching her. I wish she had though, because they were all smiling.

But little Miss Gertie. She is talking more and more, in her own way, sometimes just the begining of a word, which is enough to excite the speech therapists, so it does me too. She and I have grown so much together just in the last couple months. I find myself cooing over her all the time. This has been the best age yet. 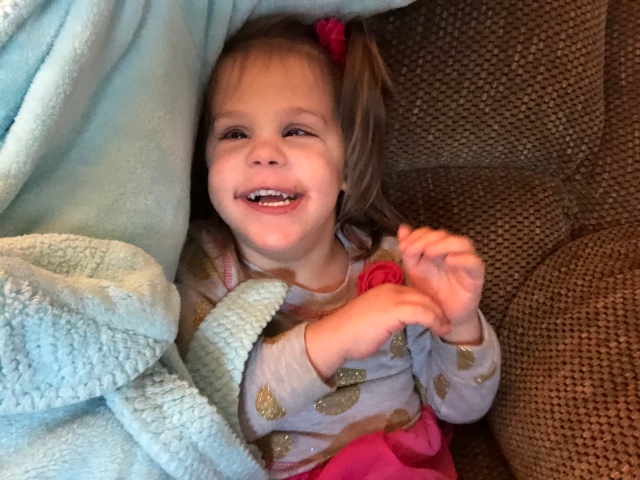 The director of the special needs ministry at our church texted me Saturday night to encourage us to attend a smaller service the next morning. She said a family with a special needs child is going to talk about their journey. I knew I needed to go even though my knee jerk was to avoid it. But that knee jerk has gotten less and less forceful these past few months.

And within 30 seconds of them talking I started crying. It was one of those silent cries like in the movie theatre where your shoulders shake and you’re desperately trying to keep your shiz together to not break out into a sob.

Their daughter is 17 now, so they’re kinda on the other side. But they did talk a bit about those first few years and it amazes me how two families with slightly different experiences could have the exact same doubts. The father would dwell every day on the things their daughter wouldn’t be able to do. (That sounds familiar, Carolyn.) Their pastor at the time told him this, that he was focusing on the future mountains. That God gives us just enough strength to get through today’s so that when those future ones come around, we’ll be strong enough. To trust is one of the biggest manifestations of faith we can produce, not trusting that God would move the mountains themselves, but that he would move us to climb them.

The mom talked about how their family’s spiritual make-up had been irrevocably changed because of their daughter. That it was she who led the parents to the light during many dark days, and without saying a word, also turned her siblings into compassionate adults simply by her being alive. The weak leading the strong, which is just so like something Jesus would do.

Today I have my weekly women’s bible study and it’s centered around my Identity in Christ. So, following on the heels of that emotional Sunday experience, we touched on Mark 6:45-52 today:

45 Immediately Jesus made his disciples get into the boat and go on ahead of him to Bethsaida, while he dismissed the crowd. 46 After leaving them, he went up on a mountainside to pray.

47 Later that night, the boat was in the middle of the lake, and he was alone on land. 48 He saw the disciples straining at the oars, because the wind was against them. Shortly before dawn he went out to them, walking on the lake. He was about to pass by them, 49 but when they saw him walking on the lake, they thought he was a ghost. They cried out, 50 because they all saw him and were terrified.

Immediately he spoke to them and said, “Take courage! It is I. Don’t be afraid.”51 Then he climbed into the boat with them, and the wind died down. They were completely amazed, 52 for they had not understood about the loaves; their hearts were hardened.

…drilling down to verse 48. Why was Jesus just gonna walk by them instead of help? Because we have to sometimes endure hardship to strengthen ourselves. That sometimes our prayers aren’t answered immediately. And sometimes we need to work stuff out within us before being given a blessing that maybe we wouldn’t have been able to handle prior. Blessings on a cracked foundation can crumble.

I dunno. The longer we work with and love on and raise Gertie, the more I’m learning patience and trust. Every day I grow more grateful for her existence.

But she also chipped her front tooth and we don’t know how it happened. So there’s that too.