These are from the beginning of August. If I don’t squeeze these photos in this blog, Annie will hold it against me for the rest of my life. How many photos are there of me outside my play pen I ask you? Well, ask my mom. Actually don’t ask her because I’m sure she can’t remember, which equals not many. Maybe that’s why I’m so camera happy. Someone take my photo for the love!!! So really, I’m just helping Ruthie and Annie become desensitized to needing their life documented.

On with the show…

Eat this Family Circle. That’s called a car, made with blocks, set up in a circle. Haven’t seen that in *any* of your mags. Ruthie, don’t look at those magazines. Stay impressed with me, please. 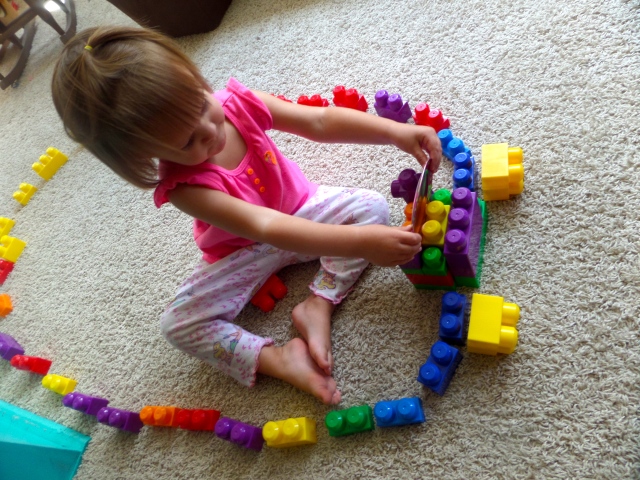 We went to the ice cream shop. We pray for ice cream and brownies every night. I beg her to think of other things to pray about, but you know what… there’s been many a night that I’ve been grateful for a dessert at midnight, so she’s on the money actually.

Jama & Dad-dad came for a visit before Jama had to start teaching again. You can tell she’s a preschool teacher… immediately on the ground interacting.

We went to the farmers market and bought some flowers to bring home. At the park we met someone with a Golden-doodle dog (like a labradoodle but with a golden retriever) and talked all the way home about getting one because of Ryan’s allergies… only to look up that they’re cost more than a van needed to pick them up in. Oh, but I day dream… 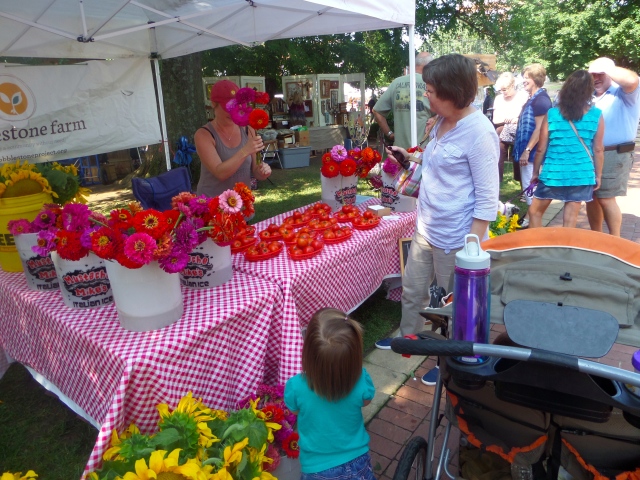 Before going home, we stopped at a gas station/restaraunt in Garfield that have gigantic ice cream cones (and good food too.) There’s large, medium, small, baby, and peewee. A man in front of us got the large and had to put a cup on top and hold it with two hands. Ruthie opted for the peewee…. well, two I guess. Can you find her first cone? 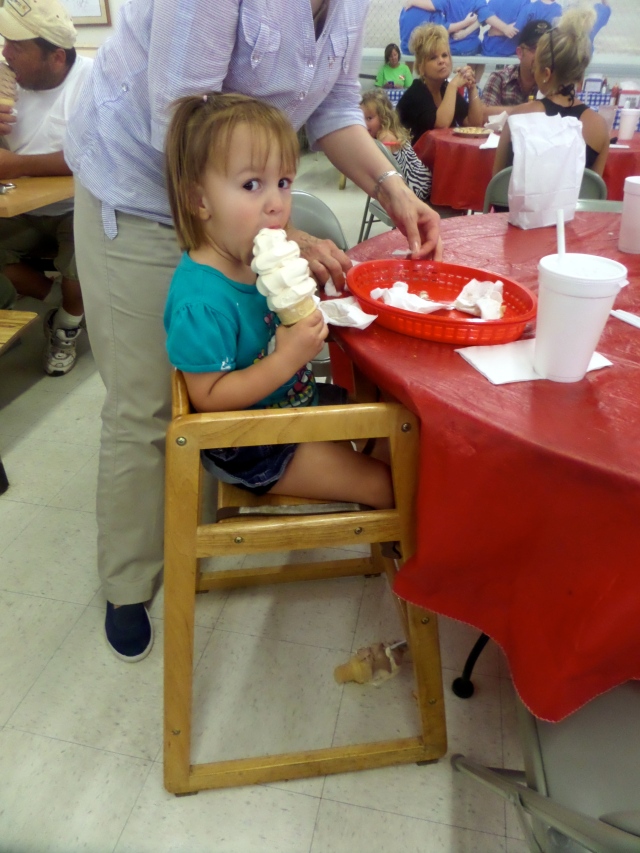 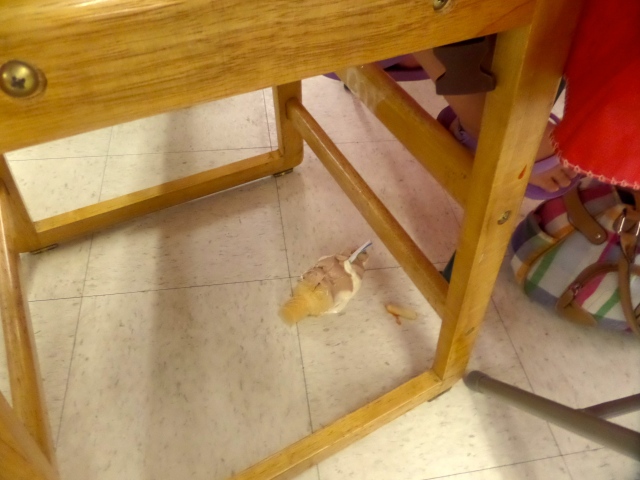 You know it’s a good visit when you slip into routines. We eat dinner, play, kids go to bed, then I make dandelion coffee, and we all sit in our unofficial seats and watch a movie, then go to bed.  The two movies of choice were Heaven is For Real and Saving Mr. Banks. I hardly watched the second one, really I stared at everyone else to make sure they were crying along with me. I’ve already let loose in front of his parents because of Gus on Lonesome Dove, so now don’t feel the need to hide my sobs.

In other news, Annie makes the same face I used to for the camera. 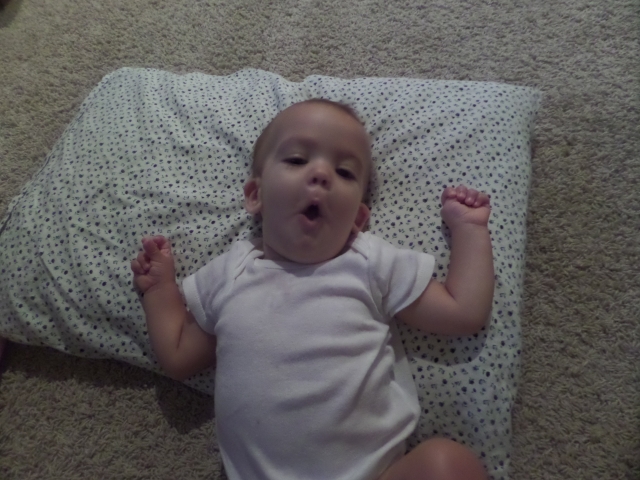 Ruthie pretended to be mary poppins.

Carpet bags are a must in this household.

Annie loves chasing Ruthie around via her daddy. 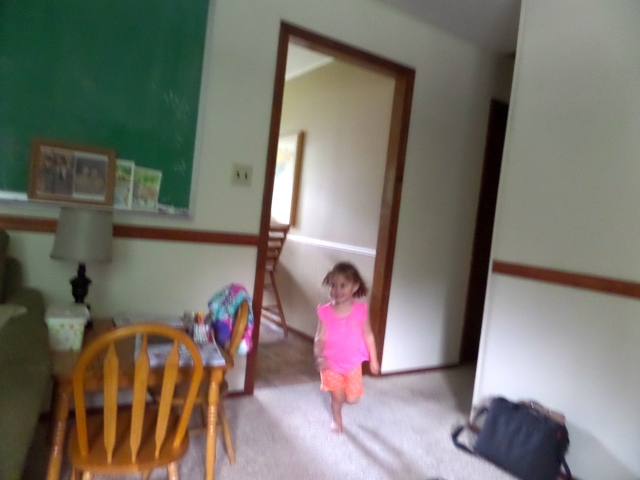 You probably already saw it, but we finally got a legit swingset. Our (funny) neighbors were getting rid of theirs, so we bought it cheap cheap cheap and we made a big deal watching it get brought over, complete with a blanket, toys, and no pants. That’s RUthie’s MO. 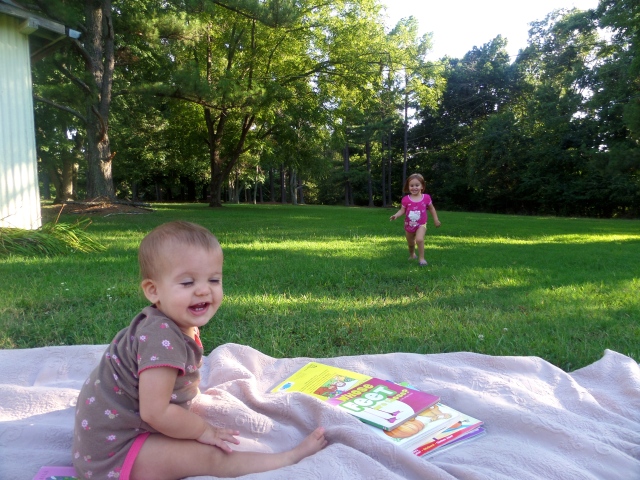 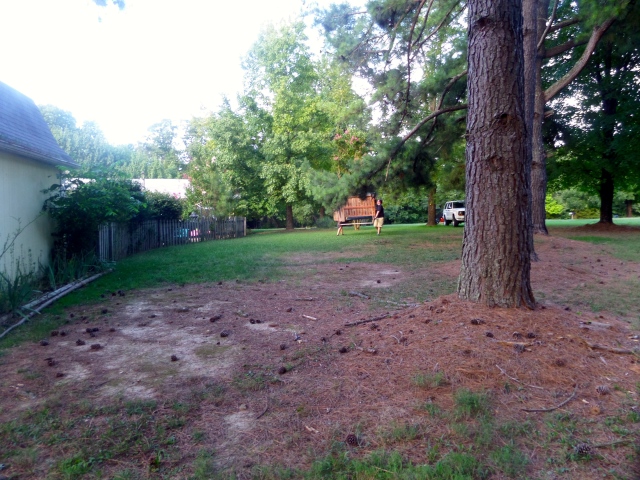 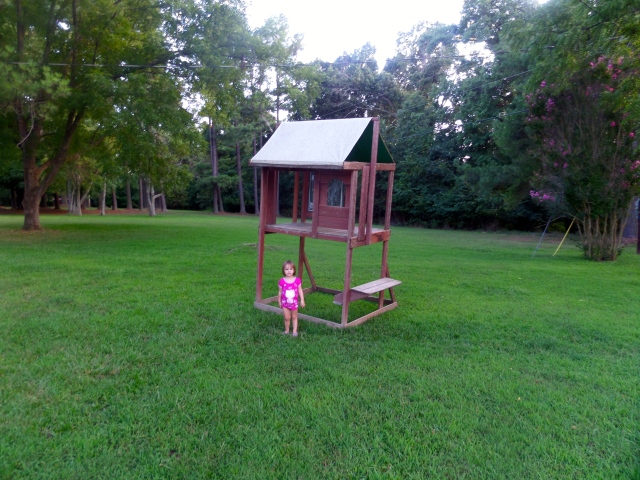 Ryan’s brother came over to help set it up and we go outside the fenced backyard so much now. I love running around that area, but am too lazy to chase after Annie. This has been wonderful to use!

It’s already been two weeks since Ruthie’s 3rd birthday and I can tell she’s already growing up. When I tell her the show is over and time to go to bed: “Mommy you have GOT to listen to me. There was still some show left. You’re just not listening to me.” Or justifying her poo-poo jokes by saying “You don’t think it’s funny, but I do.” Well, dang. How can I argue with that?!  But then there are moments like tonight in our (non-existant) garden where she digs a hole, runs to bring water in the watering can, and pours it over her hole. I ask what she’s growing…. “A fairy god-mother.” I simultaneously go awwwww and then say Yeah, good luck with that one. The deer will eat her before you get a Bibbidy-Bobbidy.

Anyway, back to her birthday. I had what I was calling a glorified play date with her friends… because it’s time she learns, if she hasn’t already (we all remember the Mary Poppins shenanigans), that her mom is not creative in a crafty way. In my head I’m creative, it’s just hard to connect that thought to my fingers.  My email to the moms started off with a goonies reference, which then spurred a mom to post a still from the movie.

Yep, I’m going for it. When was the last time kids played pin the tail on anything? I’m bringing it back!

I went to Staples and bought their $3 engineer print of that pic, and that night Ryan and I started coloring it. After watching him use 4 different colors to create a skin tone, I grabbed the dang peach pencil and went to town. Seriously. It’s 3 year olds, Ryan. 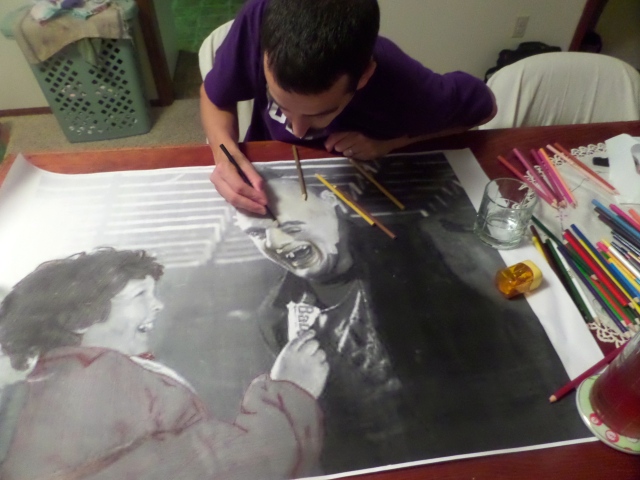 I decorated the backyard which to me means moving chairs around and plopping her easle nearby. Done. 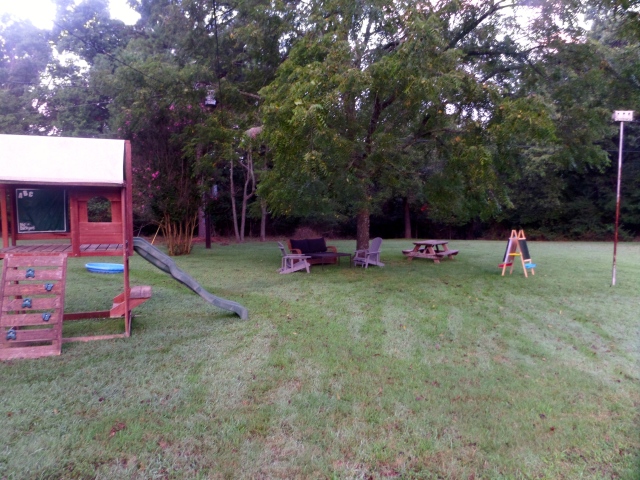 Here it is kids… don’t be scared. 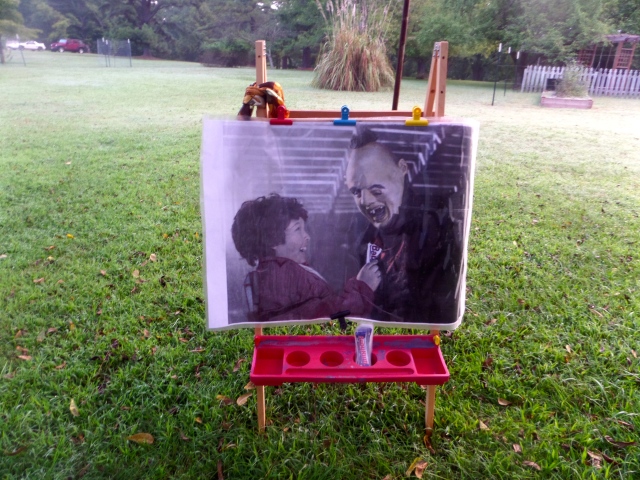 Oh, hold up. I did do a pinterest activity. Fishing poles with magnets to catch fish with paperclips. Yeah, I think only one fish was caught, and that’s because the magnet was already attached. Whatever, I tried.

It was pretty low key. We sang to Ruthie immediately, during which she looked at me to sit next to her. I was just happy she stayed there and didn’t cry. She’s been regressing a little into a shyer version of her once outgoing self. But I get it. I’m one way with a group, and another one-on-one. I’ll sit next to ya, girl, don’t worry. 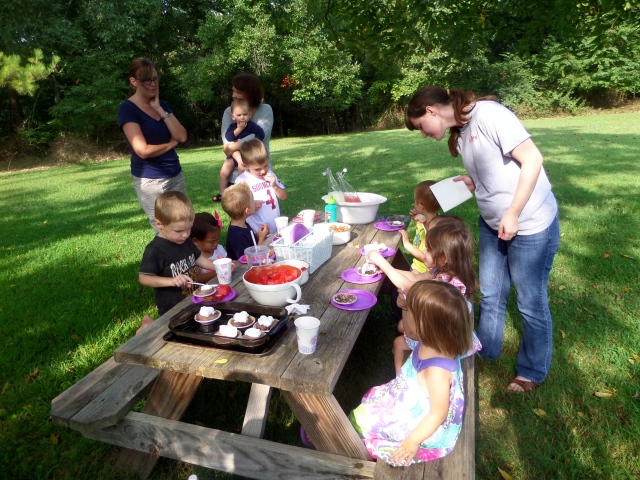 Then we just played and talked. Some of the boys were throwing pinecones on top of our detached garage/shed roof… when our mower-guy came that afternoon, he found a copperhead in that same area. I spent the rest of the night imagining everything that could’ve happened. I guess that’s where my creativeness comes into play: Imagining the worst of every situation until I can’t sleep at night. 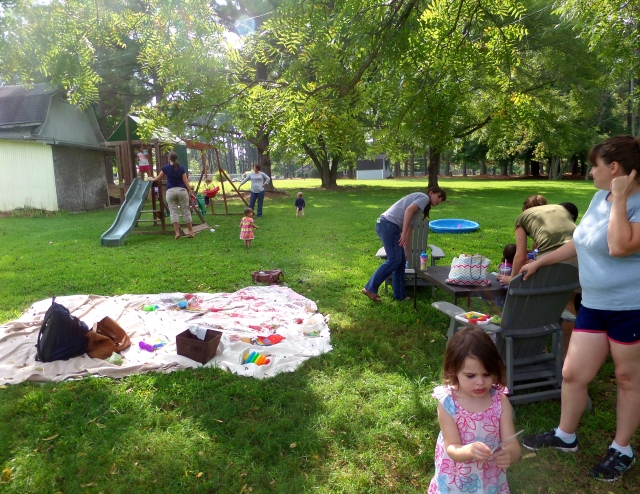 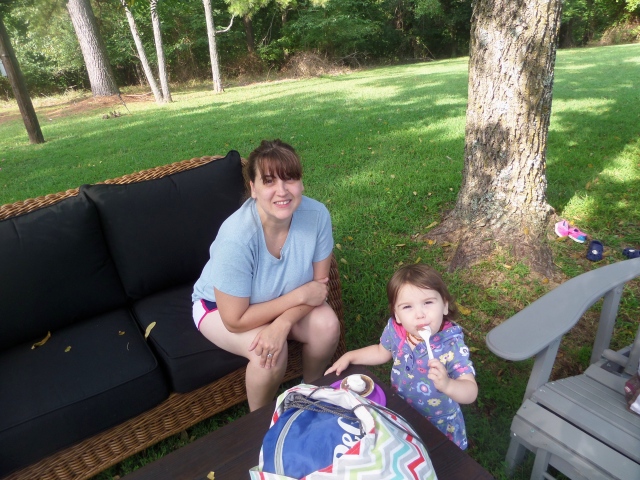 Stay away spider if you value your life.

Annie was going nuts, so I asked Mandy to head up the baby ruth game.  I really think it was a hit! 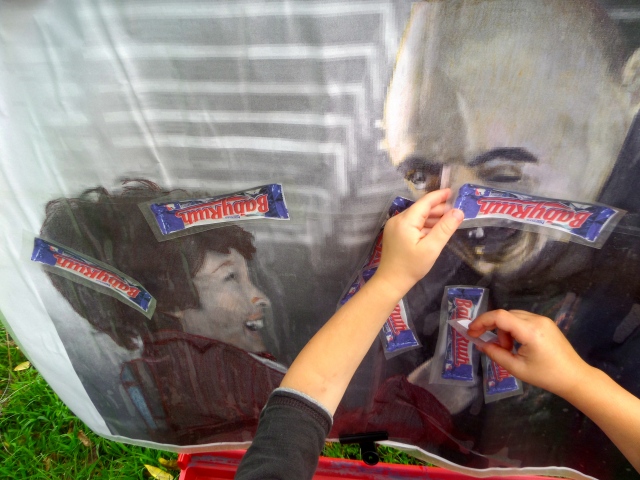 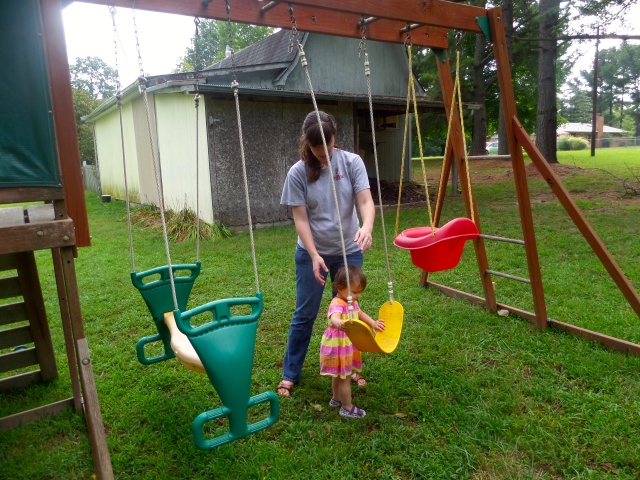 One mom commented on the bottles I used for the lemonade and asked if I made my own wine. Why, yes I do! Okay once I did (of dandelion wine) and have never since, but still. And randomly I had one tiny bottle in our fridge that we’ve lugged around for over 4 years. Why? I have no idea… it became sort of like a pet. So I broke it out for a quick taste test to which we all agreed that one tasting was plenting. I swear, don’t light matches next to that stuff, it’ll you’ll scorch your date. Out the rest was poured on the other dandelions in the yard. This is for my homie….

A few days prior we visted my brother’s house where Ruthie and Annie ate about 3 tons of grapes just because they could and because I wanted them to be quiet so the adults could talk. Think of all the crappy wine I could’ve made with those grapes.

We also had a family over that we hadn’t seen in about a year. They were in our birthing classes while I was pregnant with Ruthie, so it was fitting to see them so soon to her birth-day. This mama has 5 kids, homeschools, and still wears make-up. It all intrigues me.

Ruthie was in heaven chasing her kids everywhere and making pinecone creations with them. Sometimes Ruthie pulls away shyly, and other times she is instantly someone’s shadow. Annie is the same way and they both just took to these kids so quickly.

The parents talked until 10:30 (!!!) and it wasn’t until the last ten minutes when the kids started getting restless and over-tired.

So fun. When I see all her kids running around it makes me want to have a gaggle of my own. Ryan would at least like to try.