Thirdly: Our family is sick with colds. We’ve tricked Ruthie into eating garlic and honey one too many times and she’s starting to revolt. Not in the gag reflex way, more like the Les Mis waving a large flag to all the other toddlers in America to turn on their parents if they’re being tricked with a silver (looking) spoon.

The good news? It’s fall. My second favorite season next to Spring. I used to be a fall girl, but to feel the sun starting to shine stronger and longer after a cold winter is probably the greatest feeling ever to me. But fall is a close second, and it’s been so fun to see what our trees are doing with each new season we are here.

These dogwoods. I never knew they went cranberry. 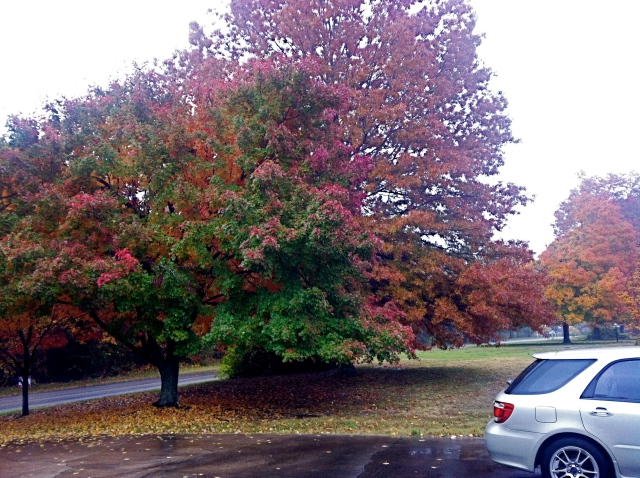 I’ll happily get the mail under those greens and reds and yellows.

Should I be ashamed to say how much I love our new home? I guess if it’s worth going into debt, you might as well like it a little.

I follow some interesting people on instagram and they take photos of their nature journaling. Ugh, I cannot wait to do that with Ruthie.

Ryan’s dad came over last month to help with a few projects. One of which was to take down some trees. When we walked out back he asked me to point them out, expecting me to point to the guy on the left here: 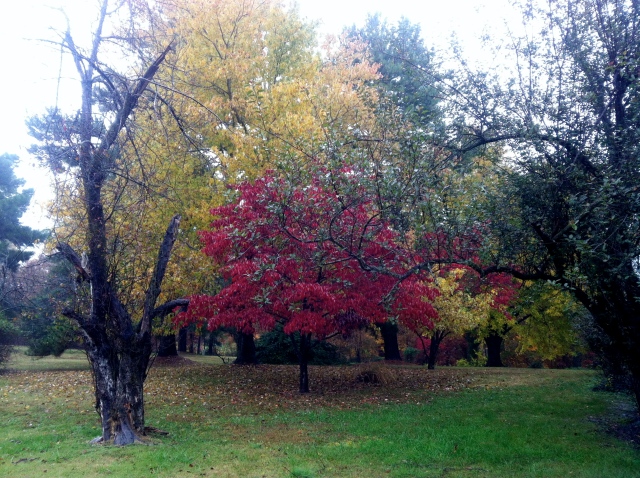 Instead I never acknowledged that dead tree, I asked him to take down two small living trees that were blocking views and the sun. He asked, Are you sure you don’t want that one cut down too?” I looked at him like he were crazy. The dead tree?! No way, they’re magical to me, I said.

Ryan later said, It’s okay, just accept that they won’t get you.

Ah well, you win some and lose some… onto some Disco Dick and the Mirror Balls!

My sister suggested we go to this concert a few months beforehand and, honestly, I was dreading the whole scenario because of Annie. But I took a deep breath, drove up to KC, and prayed that Annie would hold fast to her long stretch from around 7pm to 11ish. It worked out great!

But who’s that chick on the left?

We tried to have an intervention with her before going out because she looked just a little too… real.  The dress was my mom’s from the 70s and she was wearing a wig meant to be worn on days other than Halloween. Nothing was exaggerated. So we locked her in my mom’s room and forced her to try on several different outfits. At first she thought we were setting her up on a blind date, then was convinced we were celebrating her birthday five months early, and finally just stood her ground and put her original outfit on.

I guess I shouldn’t talk. I looked like a freaking disco ball on the dance floor. 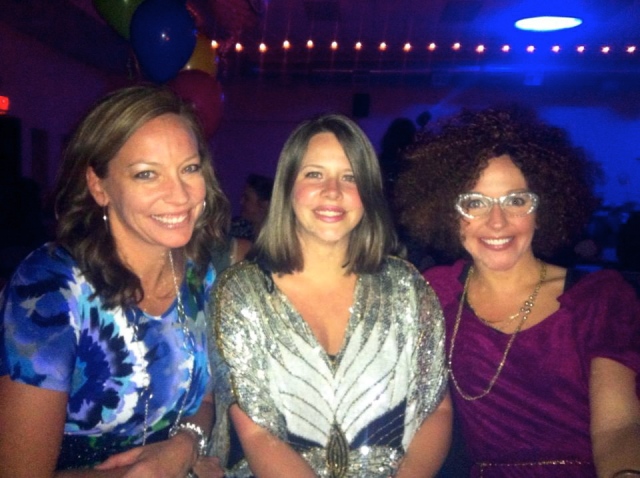 At one point I caught my mom mocking me because I was standing in the middle of the dance floor, arms outstretched, swirling my body trying to get the little balls of light to move around and around.

So was his outfit: 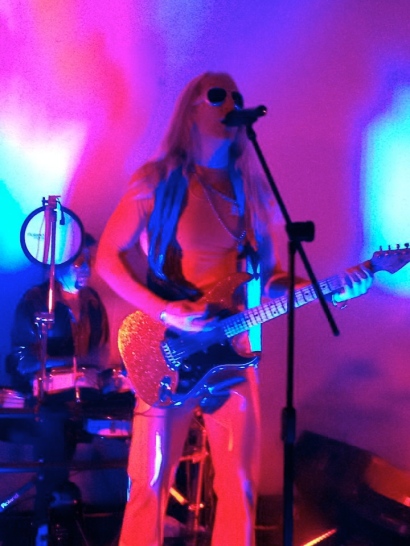 We were dancing fools, though. 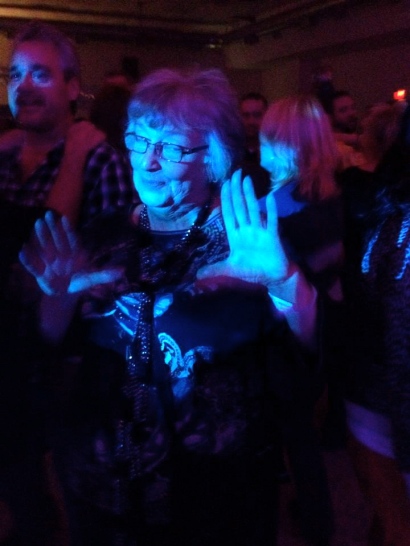 Before we left, we all agreed to dance like no one’s watching. Problem was, everyone was…. because we were strangers. This was apparently a fundraising event so everyone knew everyone, except for the four weirdos in a circle shaking their groove thang. Amy met some people who confirmed that we’d be accepted by the crowd if we don’t come off to strong, or something like that.

I know they’ve never seen anyone with my Elaine Benes moves, jerking and jolting her way through the dance crowd, but must have given me a pass because no cops were called.

On the way home, I called dibs on the front seat. Yes!!! Do you know I still feel like I have to sit in the back just because I’m the youngest? Nobody puts baby in the backseat……after they’re 33.

In other news, we stayed on in KC for a couple days into the workweek because Ryan had to attend a conference at Hallmark. Ruthie’s cousins ended up having that Monday off, so we all went to the pumpkin patch together!

But first she had to feel cool and play with her cousins and cousins’ friends in the back yard. 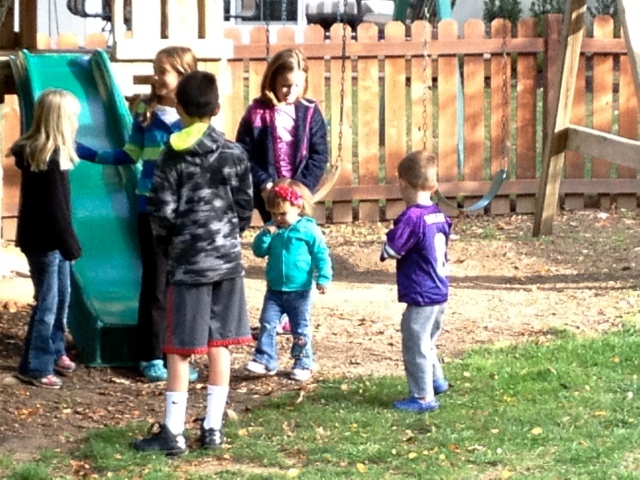 Jean on jean, baby. I knew that by not being trendy, we’d end up being trendy some day! You’re so with it, Ruthie!!

They’re so good to her, always including her and encouraging her and loving on her. 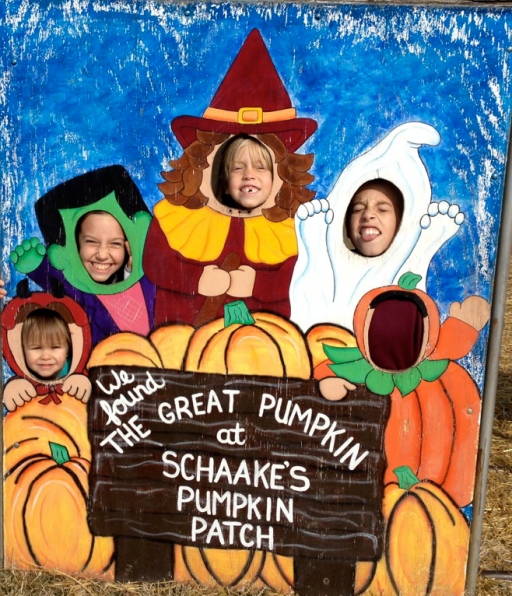 When we got home, Ryan’s brother came over later that week to help put up our new swingset/arbor. 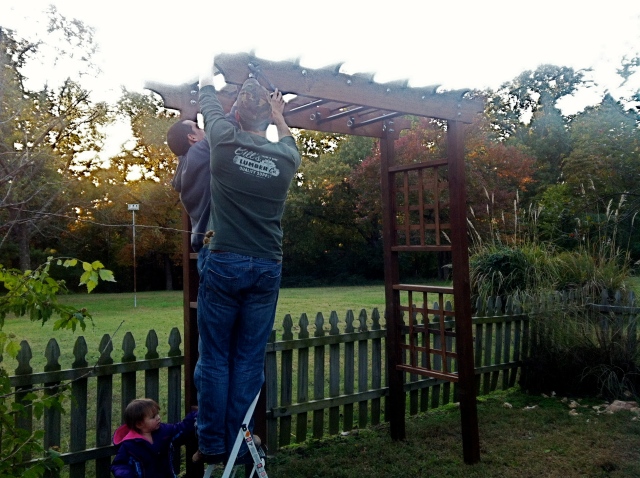 The guy who made it, customized it to hold two swings underneath, and eventually when they outgrow it, we’ll put a bench swing on it to extend the life.

Now we’re just deciding on what to grow over it… grapes? Roses?

Thank you Jama and Da-dad!

Ruthie and Annie’s area in the backyard is slowly but surely coming together. We found free stumps on craigslist and Ryan hauled some home. She’s just now starting to conquer walking from one to the other, but it took many afternoons of holding my hand before going solo.

That little back corner is where I want to set up some fun things: a sandbox (Thank you Grandma & Papa!), a mud kitchen, these ribbon things that hang from a tree branch, anyway.. I’ve finally convinced myself that I’ve got time. The girls are not 15, so just settle down.

One day Ruthie just wanted to sit in our bed and read books. If only Annie we’re wiggly and would just hang out, I’d be all over that game plan. 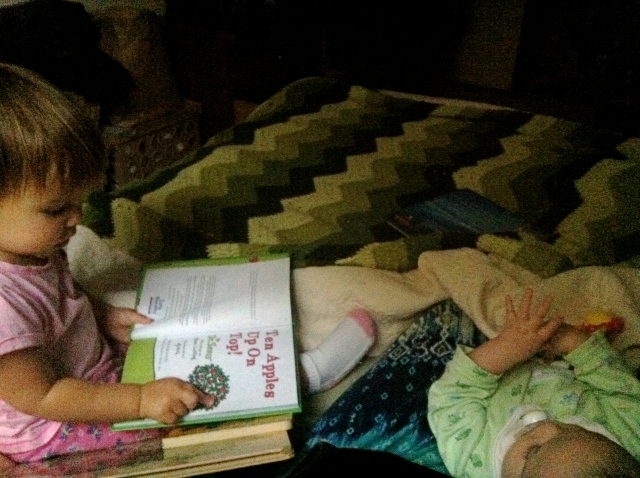 Instead we hunkered down on the couch.

She still wasn’t feeling well on Halloween, so we didn’t trick or treat. We did go to our church’s Trunk or Treat and managed to get a photo of her shy face.

Yep, that’s a pillowcase. I’m bringing that tradition back folks!

And if you’re wondering: yesIateallhercandy.

It wasn’t a proud moment, but I was really doing it so Ruth wouldn’t eat any…. so I’m pretty much a martyr.

Anyway, I’m all sorts of daydreaming right now. I had some girlfriends over for a playdate last week. Well, I took one of them around behind the workshop to the little carport/lean to area, which houses all sorts of spiders and scary things.

But she saw something I didn’t. 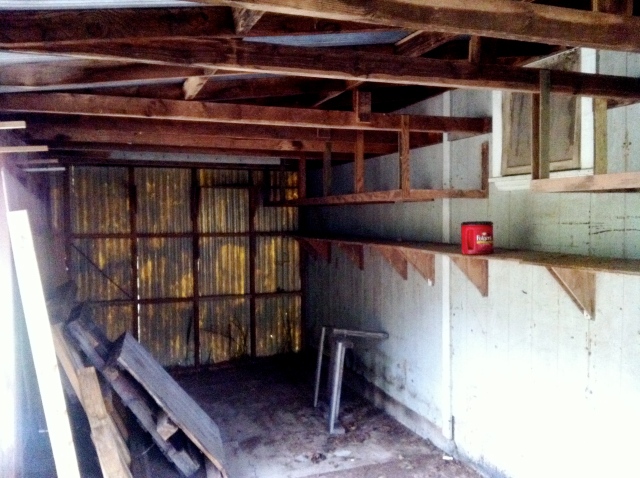 Nesting boxes, a roof, and the two doors behind the fallen over trash can actually open up, so if we enclose the rest of that little area we’d still have access into the coop with room to make a chicken run off of it. Agh!

Ruthie likes to sing to that little portrait of Jesus.

Okay, back to other discoveries.

In our back woodsy area, we found fence posts that we’re probably going to use for our raised beds next year.

Next to those posts were some wiring, already shaped in a circle. So Ryan drug it over next to the ravine to make a compost pile. Can you see it on the lower right in the pic below?

But then, Annie and I went on a mini hike during one of Ruth’s naps and within a few steps under the tree canopies, I saw this:

An already built compost area! It’s probably hard to tell but two sides have wood backing and there are posts with wire to keep it all in. After things die down a little bit more, we’re going to clear it out and make a path to it.

Here’s my hiking date. Don’t mind my comb over.

I wonder if she’ll be my little day dreamer. I watched her as she watched leaves fall. I pointed up to the sky and watched her look up. 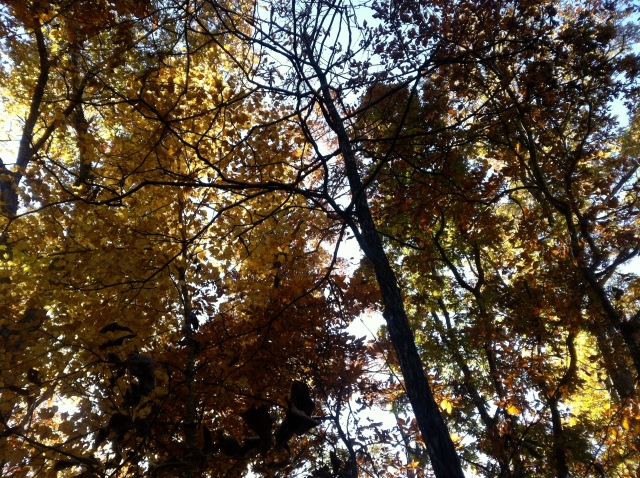 I’m a watcher. Maybe she is too. Maybe she doesn’t feel the need to smile at every last thing that someone points out (that would be UNlike me, though). Maybe her excitement for falling leaves is so deep that to smile would be an effort too much to handle.

When she watches, she doesn’t smile.

But when she does…. oooh Lawdie! I love how her face lights up.

Feeling blessed tonight for all of my family, my home, and these memories we’re making.