This is getting out of hand, how late these are, but I’ve just got to have a record of all of this. Ruth is about nine to ten months in these photos. 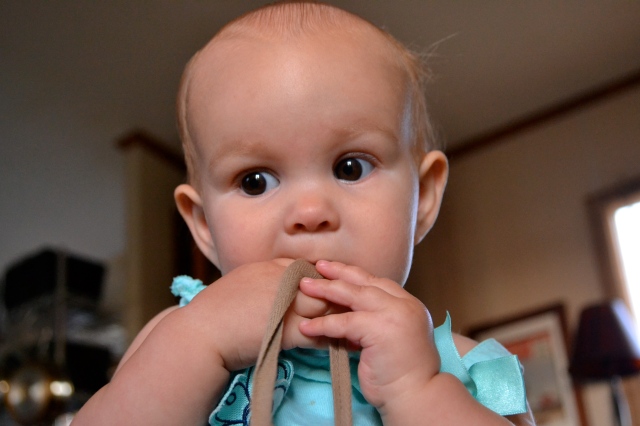 ‘Once in a while, she will sit on my stomach while I lay on the ground. But only if I have a gift for her. In this case, my shorts’ string.

Pre-top teeth. You can just see them bulging out. It changed the way she looks that’s for sure, but now I can’t imagine her with out them. Well, I guess I could look at this photo. 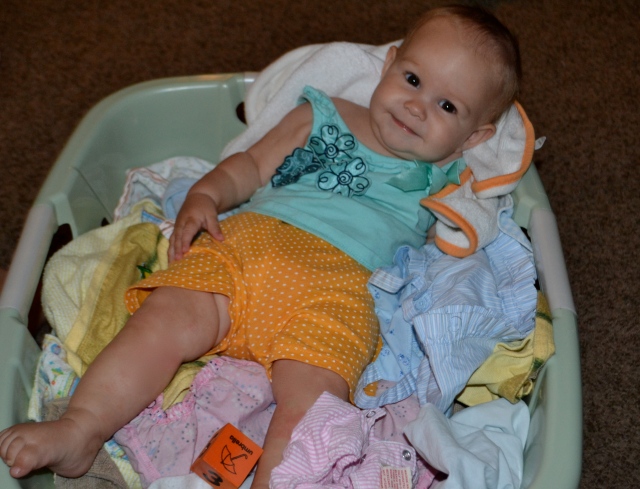 ‘Relaxin in the laundry basket.

‘Packing up the Shack is a long process. It wore Ruth out.

But she still found time to eat. Her jama and I laughed so hard at the faces she’d make. 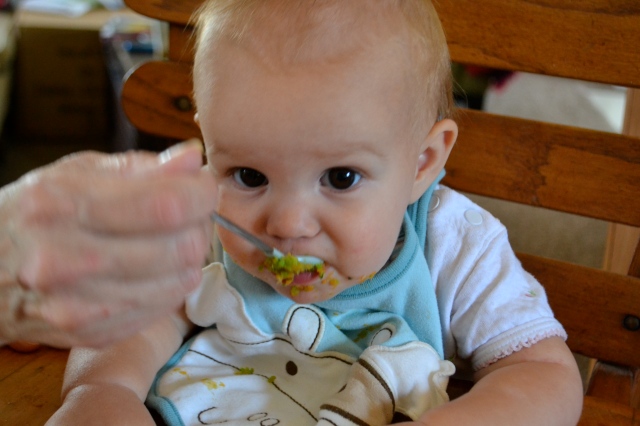 Who knew veggie delight was so sour? 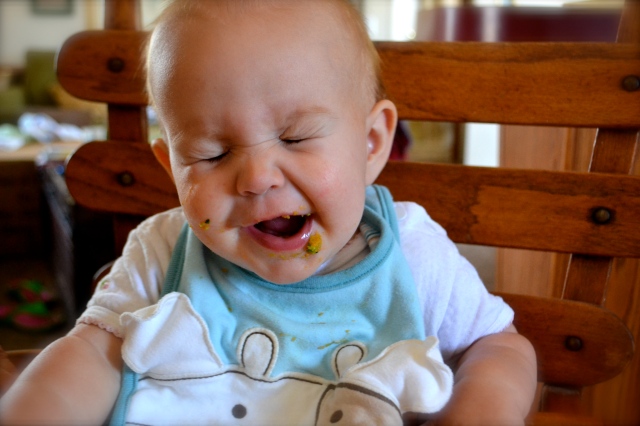 Then she’d peek her eyes open, probably hoping this was all a dream. Nope, we’re still here. I’m still your mom little lady. 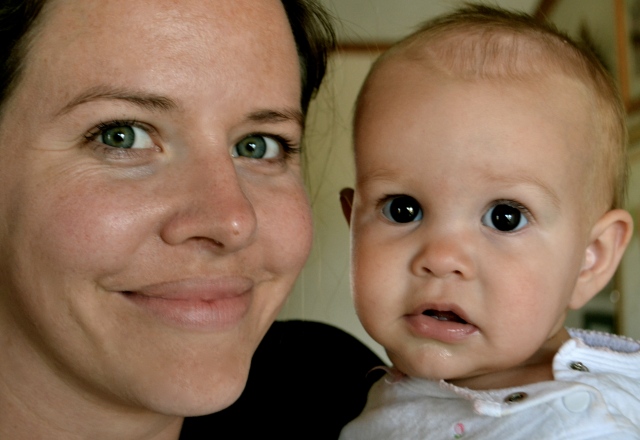 When she was first born, I was kinda disappointed that she had brown eyes. Because they weren’t me. But oh how they’ve taken over my soul. Those eyes make me grin from the inside out.

The moment before pulling herself up. I’d smile when those hands would peek above the chest. 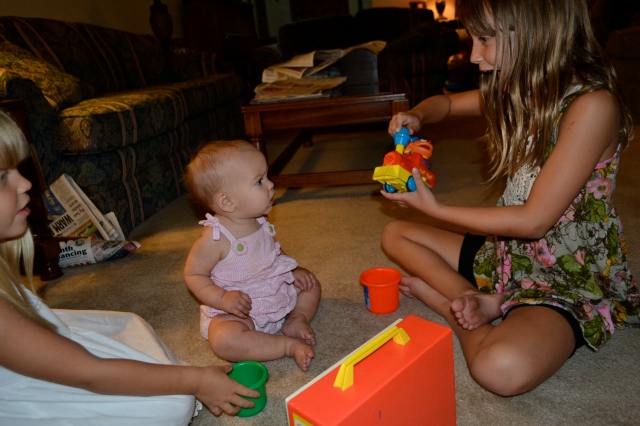 Intently listening to her cousins. 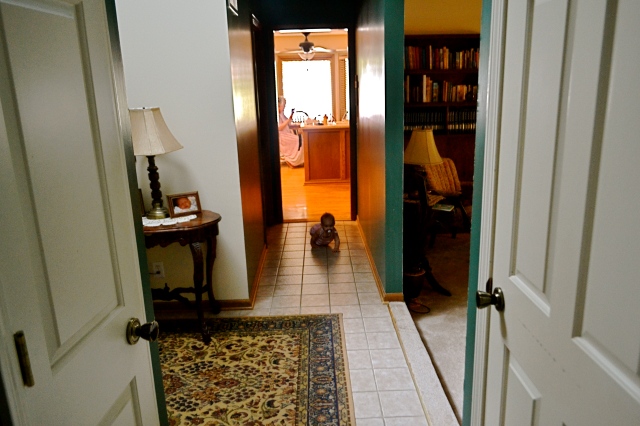 Taking over her grandparent’s house.

Always on the go, that one. And wouldn’t change a thing.

Just a month late. Right on schedule to talking about my family’s get together at a nearby lake. It was drought, drought, drought until my family decides to spend time outdoors. And then rain (which because of said drought, we couldn’t complain about). In fact, it held off for most of the weekend and only really hit hard on our drive home.

We arrived in the dark, walked into the guest house and I immediately ate half a box of cookies my sister brought. Because, you see, she gave me a compliment on looking as if I’d lost some baby weight. That in of itself gives me the right to shove my face with sweets. Hey, I’m on vacation. Even if it’s in my own neck of the woods.

So because we couldn’t see anything pulling into the drive, we weren’t able to see the great lawn area fit for a volleyball king.

We did take advantage of the semi-screened in porch, though. We didn’t see the little holes in the screen until the next morning when I wondered how my ankles could have been eaten alive just on my walk into the house. Ah yes, the mosquitos probably chewed their way through it in hopes they could keep me from continuously talking about my backahe. So finally they shooed me in, but as I was settling into the a/c, a scream was heard on the porch. Does someone else have a backache too? No, E was telling a story and right in the middle of it, a grasshopper landed on her chest. The scream was so brutally high and loud, the grasshopper could’ve been the size of a gremlin. The one with a mohawk. Oh we laughed so hard, but E was not ready to laugh at herself and quickly took to her room.

The grasshopper was forgotten the next morning and out we were again. I wish we had a screen in porch. 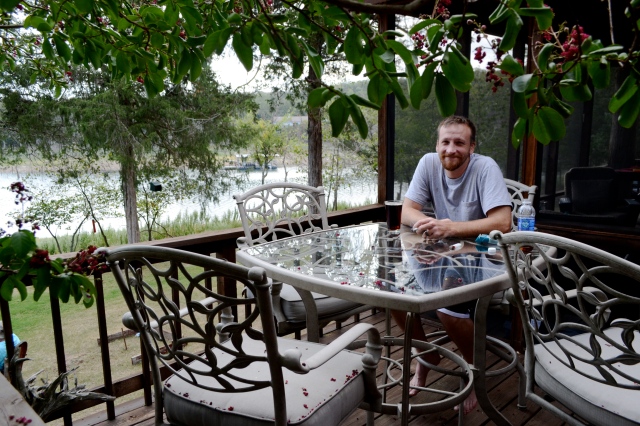 M wishes he had a lake. To each their own.

After a quick breakfast, we got dressed and headed down to the lawn for a game of volleyball.

For as much as I complained about my back, it took only one ball about to touch the ground for me to lunge and plie and genuflect my way to not let it drop. Seriously, I thought I was on the Olympic team. And somehow we only got Bronze. Whatever.

We also hung out on the dock. At one point the kids were debating about getting in the water. So Uncle R took off his pants (yes, he had swim trunks on underneath) and charged down the dock to jump in the water. I was so proud of him in that moment. When you’re a kid, there’s nothing better than one of the adults getting on your level. That’s all it took for them to follow him in. All except little K, who would run run run and then stop at the edge. Run run run and stop. That is, until we saw lightening and hollered at them to get ouf of the lake. No, that’s when K jumped in. Stinker. 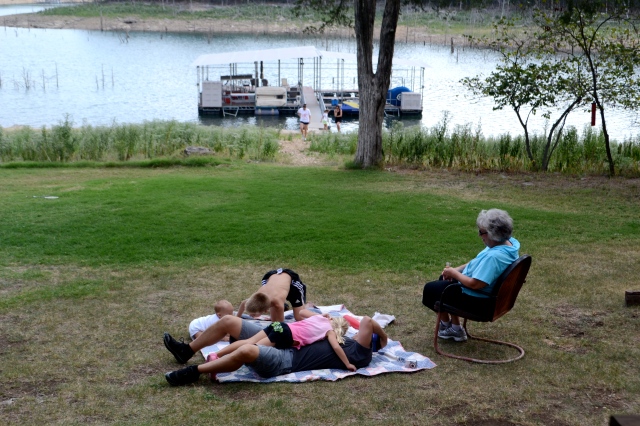 So as thunderclouds threatened us, we spend the majority of the day lounging on the lawn. I think my dad was up in the screen in porch reading his lastest book. I always say I’m going to read when I go somewhere, but I never make an effort. I wish I did though, talk about relaxing..

And then out ran Kim Kardashian as her mom called her. Big sunglasses, swimsuit, places to be. I sincerely hope paparazzi were no where near for what was about to happen.

After seeing R given a superman lift, my sister A decided to give it a spin.

Yet we couldn’t take our eyes off of L doing her latest stretching move. The last time we all camped out together, I swear L showed us about 30 different yoga moves. It may have been the spirits in her glass that loosened her up, but all I know is that it was a long and intense workout. For us. From trying not to laugh. She never broke a sweat.

So in honor of that memory, she graced us with her outstretched legs’ presence once again.

Talk about legs. Look at those rolls!

She must have heard me. 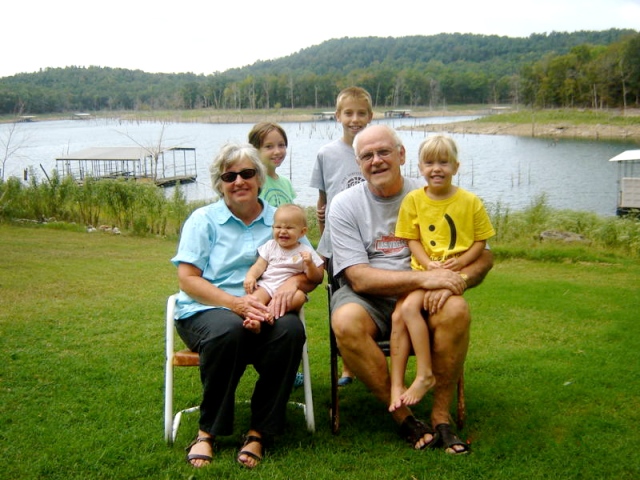 Before we left, we got together for some group shots. If this photo doesn’t capture how Ruth is grandpa junior, I don’t know what does. Now, when she wakes up, her hair is all tosseled giving her a mad scientist look that I always associate with my dad. There’s one photo in their basement with him holding up a string of fish and the biggest grin on his face. Looks like R got that gene.

And then one of the whole gang, including those of the four-legged kind.
Good times!

Yep. I still (kinda) got it, because a nap was needed after our adventures. However, naps also got me through college, so really I was just reliving those days.

I haven’t mentioned that as soon as I got home in Arkansas, I zonked completely until the next day. That’s called an eye-closener, folks.

So yes, these girls and I go back to my junior year in college, in which we lived in a 6.5 bedroom home. (6.5 because L basically lived in a closet for a lower rent.) It was our sorority without the fees. And as life went on, some of us drew apart, others got closer together, until we’ve now settled into a nice rhythm of annual, or, if we’re lucky, semi-annual get togethers. These three have all taken a trip (some more than once) down to visit me in Arkansas, taking time out of their busy lives to do so.

It’s hard, keeping in touch, especially in person. So I’m making the effort to return the favor.

This meeting had a goal in mind: The Missouri State Fair. 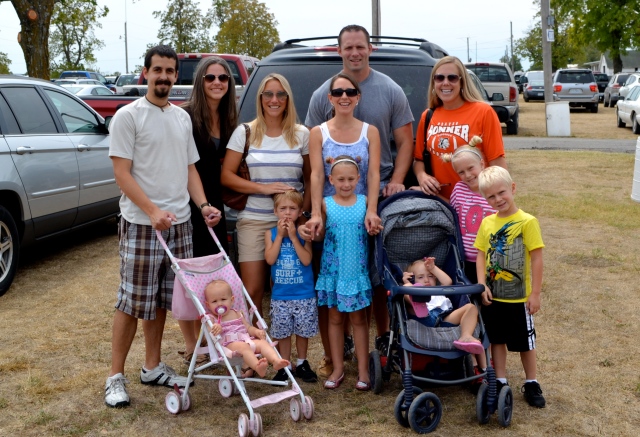 And those sunglasses were needed my friends. While the boys and babies slept soundly in their beds Friday night, we girls chatted and sampled various wines, including my dandelion bottle. If the state fair needed someone to light fire from their mouth, all they need is this stuff.

This photo sums it up. Someone get that girl a coffee, stat.

After moving the girltalk outdoors, you could hear windows slamming shut and doors closing. Our work here was done and we went to sleep. In typical bossy-like-her-mama fashion, Ruth decided to wake up at 7am on the nose. Thanks.

Everyone slowly got around. Coffee was brewed, hair combed, and off we went.

Big pillars welcomed us to the fair. The weather was perfect. Slightly cloudy and not at all humid or overly hot. All the stars were aligned.

Ruth couldn’t contain her excitement as her dad bought tickets. I mean, we were about to see something that we’ve read about only in books. It was pretty much a celebrity sighting.
What was it, you ask?

None other than sheep. I can name three books, along with a puzzle had this animal glorified. Ruth could hardly contain herself. Okay, maybe it was just me.

And maybe it was because I knew that eventually I’d see my lover that I meet at every fair: the Tilt-A-Whirl. Except this time I was nervous. Partly butterflies, and partly because I had just thrown my back out a few days earlier. Two chiro appointments later, our trip to L’s house was in jeopardy. But I laid low, and felt good enough to go. But good enough for the Tilt-A-Whirl?

I was going to take my chances.

So, as we left the sheep, and headed to the rides, the sun broke open from the clouds to shine down on one in particular. We stood in line, patiently waiting our turn.

And as we started forward to get onto the platform, the carnie informed us that it had suddenly broke down. Actually, he didn’t tell us, he just simply left us there wondering what was going on. After staying up all night, it took one of our kids to figure it out.

Deflated, we moved on.

Ruth laughed in our faces. 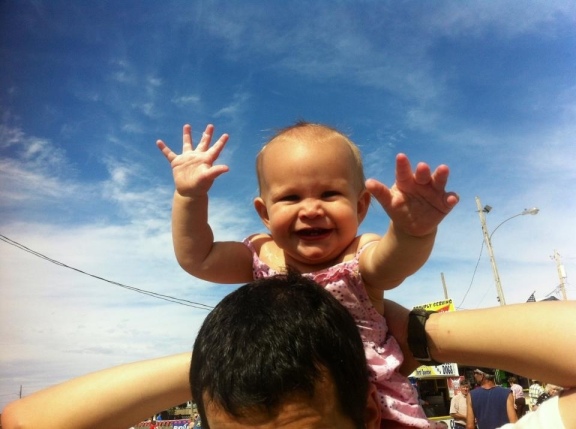 So we stuck her on R’s shoulders so I couldn’t look her in the eye. But I still felt her hovering over me, so we plopped her into block heaven.

She had never seen so many shapes. From the look on her face, it was quite possibly the best moment of her life.

After she came down from her high, we drove back and (after a nap) hung out painting rocks. What a fun way to eat up some time! I’m definitely stealing this for when Ruth can hold a paint brush.

Storm clouds were coming in, but held out long enough for fingers to get messy. 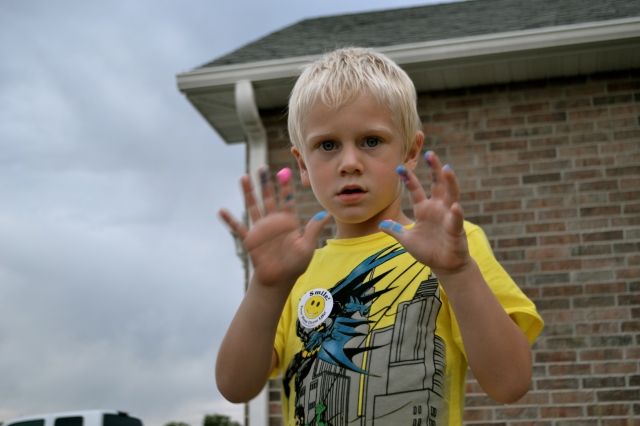 And inner artists to emerge.

And for Ruth to be anointed by M. He was so sweet with her the entire weekend, saying that he “can’t take his eyes off of her because she’s so cute.” Oh M. Don’t make me pack you up in my suitcase. 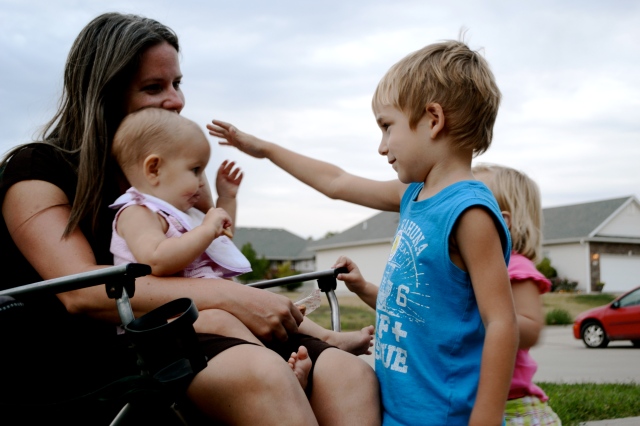 And after another late night of singing, dancing, and game-playing, we crashed around 2am.

Good food was eaten, We slept in a comfy bed, And Ryan drove home to let me nap. Yes, it was a great time indeed.